Fire breaks out in fuel tanker in MP; 2 dead, over 20 injured 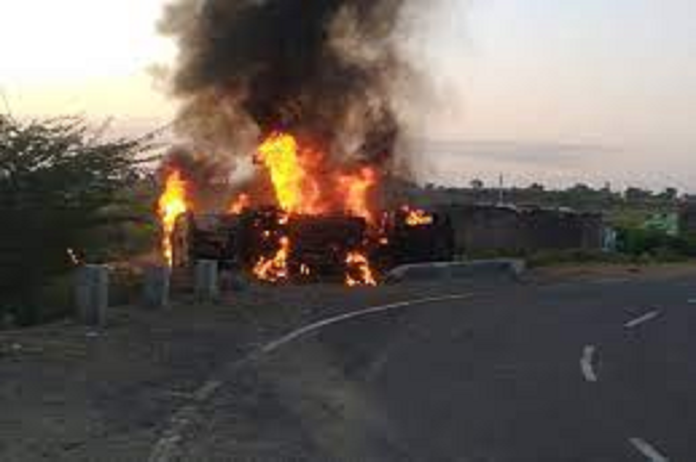 Khargone: A Major fire broke out in a fuel tanker on Wednesday near Anjangaon village under Bistan police station limits, an official said. Two persons died and over 20 people sustained injuries, said official.

The fire took place at 6 am and the tanker was moving towards Khargone from Indore. It overturned near Anjangaon village after losing control at the turning point.

MP: Fire breaks out in fuel tanker; 2 dead, over 20 injured

“As the fuel tanker overturned near the village, the nearby villagers gathered at the spot to collect the fuel from it. After that the tanker bursted,” Khargone SDM Om Narayan Singh said.

Khargone MLA Ravi Joshi said that 15 people critically injured and were referred to Indore while around 10 injured were undergoing treatment at Khargone district hospital. He demanded relief funds from the state government for the injured and for the family of the deceased.

Chief Minister Shivraj Singh Chouhan expressed his deep grief over the unfortunate incident. He Twitted, “Sad news received about a taker going from Indore to Khargone overturned near Anjangaon under Bistan police station in which many persons were injured and died. I pray to God for peace to the departed soul and speedy recovery of the injured”.

“Appropriate arrangements have been made by the administration for the treatment of injured in the accident. District Collector and SP and other senior officers are present on the spot. I am constantly in touch with the divisional commissioner and collector,” CM further wrote on twitter.