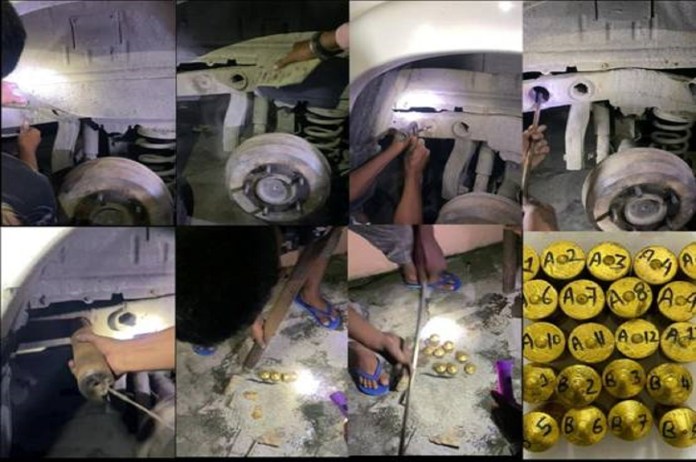 New Delhi: Directorate of Revenue Intelligence (DRI) has seized 121 kg foreign gold being smuggled through the north east borders of Bangladesh and Myanmar in September month and have booked 11 cases.

“The recent gold seizures indicate a spurt in smuggling of gold through NE borders of Bangladesh and Myanmar. While the porous borders have been used for smuggling in the past, 11 cases of gold seizures of 121 kgs in September 2022 alone show that the NE corridor is still extensively being used by the smugglers deploying ingenious ways of concealment,” the Ministry of Finance said in a statement on Wednesday.

Acting on specific intelligence and in three coordinated interceptions at Patna, Delhi and Mumbai, DRI seized 65.46 kg of foreign origin gold worth Rs 33.40 crore, in one case. The gold was consigned from Aizawal (Mizoram) to Mumbai in domestic courier consignment.

The DRI said that the gold was concealed in gunny bags declared as clothes.

In the recent case, the DRI seized another big haul of smuggled foreign origin 23.23 kg gold worth Rs 11.65 crore which was being smuggled from Myanmar.

“Specific intelligence indicated that substantial quantity of foreign origin gold will be attempted to be smuggled from Champhai-Aizawl, Mizoram to Kolkata, West Bengal by concealing them in vehicle. To interdict the contraband, coordinated action was undertaken on two consecutive days 28-29 September,” the ministry said.

The DRI officers mounted surveillance on the highway connecting Siliguri – Guwahati. Four passengers travelling in 2 suspect vehicles were identified and intercepted. After thorough rummaging of the two vehicles over a period of 2 days, 23.23 Kg gold concealed in the vehicle body in the form of 21 cylindrical pieces, was recovered.

“The gold in this case was cast in order to fit in the specifically made cavity inside the cross-member metal pipe connecting the right and left rails of chassis behind the rear wheels and suspension in both the vehicles. The recovered gold had been smuggled into India from Myanmar through Zokhawthar border in Mizoram. Four persons have been arrested in the instant case so far,” it said.