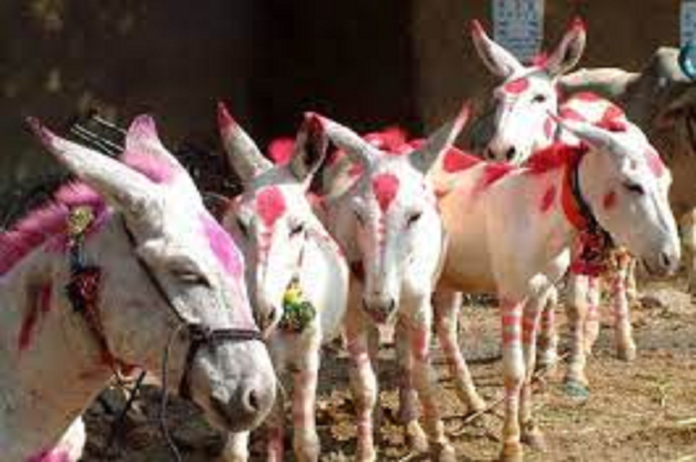 Ujjain: On the banks of the Shipra River in Madhya Pradesh’s Ujjain district, a traditional ‘Donkey Fair’ has been organised. This fair is held every year in the Hindu month of Kartik, from Ekadashi to Purnima (full moon night).

Donkeys and mules from all over the country have been brought here, and traders from all over the country have gathered to buy the animals from the fair. Before entering the fair, the animals are coloured and given a name that is written on their body. Aside from donkey and mule traders, there are a lot of horse traders at the fair this year. They’ve brought a variety of horses to the fair.

According to local trader Bablu Prajapati, “It is my traditional line of work. We buy donkeys and mules from various sources and sell them in Ujjain. A few donkeys have been sold, and a few more are being negotiated “.

Dadabhau Gote Rao Shinde, a buyer from Maharashtra, said, “I’ve come here to buy some donkeys. This fair has been planned for several years. Our father and grandfather would come here to purchase the donkey “.

Notably, such a large donkey fair is said to be held only in two places in the country. The first takes place in Pushkar, Rajasthan, and the second in Ujjain, Madhya Pradesh.