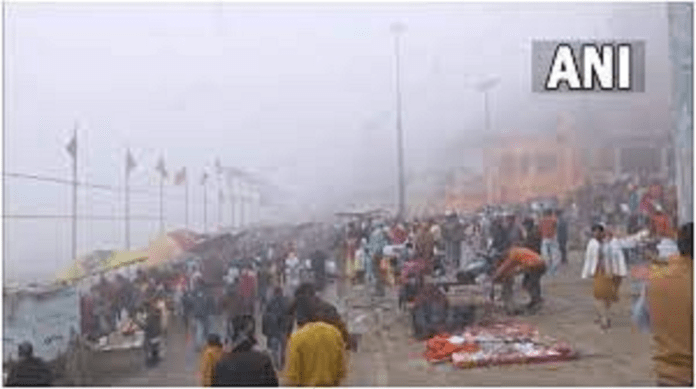 Happy Makar Sankranti: Thousands of devotees took a holy dip in Ganges in Varanasi on Saturday on the occasion of Makar Sankranti. The day is getting longer from today as Sun’s passage from Dakshinayan to Uttarayan. It is the festival of harvesting and on this day devotees rushed to the river for the holy plunge, a large crowd could be seen lining up on the Varanasi ghats to worship to the sun deity. Bath kunds have been constructed on floating jetties to ensure that tourists taking the holy plunge do so securely. Stalls selling handicraft, ODOP, and GI products have been integrated into the tent city, serving as a stable economic base for the neighbourhood. (Happy Makar Sankranti)

Hindus celebrate Makar Sankranti, a holiday during which they offer sacrifices to the sun god Surya. The winter solstice, which falls on this day, signals the end of the month and the beginning of longer days. It is also the first day of the sun’s transit into the Makara.

One of the most fortunate periods of the year is Makar Sankranti, which coincides with the Sun’s passage from Dakshinayan to Uttarayan.

The event, which is celebrated on January 14 each year, is known by a variety of names across the nation, including Pongal, Bihu, and Maghi. At several ghats around the nation, devotees conducted ceremonies.

On the occasion of Makar Sankranti, a number of Hindu devotees and Naga Sadhus from various areas of the nation came to Kolkata’s Babu Ghat to take a holy bath during Gangasagar Mela.

The largest fair after Kumbh attracted over lakhs of pilgrims, including Naga Sadhus, to Babughat in Kolkata, the Gangasagar transit camp, to take a sacred bath in Gangasagar.

As they travelled hundreds of miles to take a sacred dip in Gangasagar on the festival of Makar Sankranti, several Naga Sadhus in the transit camp attracted notice.