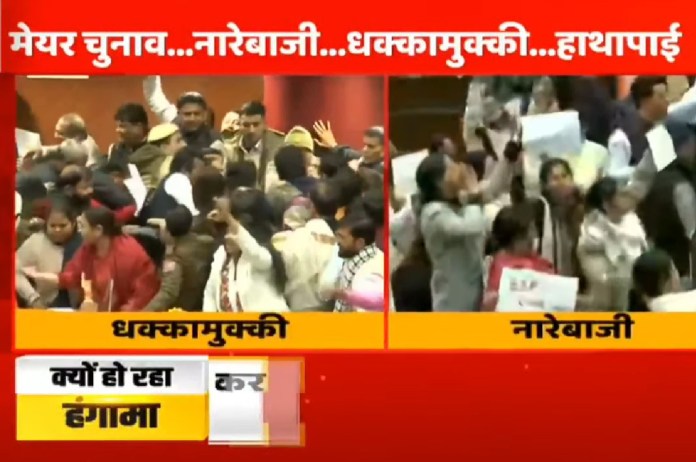 New Delhi: After the clash broke out at Civic Centre in Delhi on Friday, Aam Aadmi Party (AAP) and Bharatiya Janata Party (BJP) have been shifting blame on one another, calling the other political outfit responsible for creating the havoc.

In his statement, BJP leader Manoj Tiwari said the ruling government in Delhi has lost “morally”. He said, “Why the AAP is scared… AAP has been defeated morally… does it think that its councillors will not be supporting their party?”

Adding to that, Union Minister and BJP MP Meenakashi Lekhi said, “All the ruckus is started by AAP leaders. This is because they are unaware of the rules. When they are in majority, why are they afraid? AAP MPs do the same in Rajya Sabha as well. They should allow voting.”

The Bharatiya Janata Party leaders said that AAP does not have faith in its own party which is why they are afraid that their elected councillors will vote for the Mayor nominated by the saffron party.

Meanwhile, the AAP put the blame on BJP saying that the saffron party is trying to dominate the situation by conducting the swearing-in of nominated councillors first.

Asking councillors to behave in the House, presiding officer Satya Sharma warned that a legal action will be taken. Sharma also claimed that there is swearing-in of the nominated councillors has been done first always which is clearly being dismissed by the AAP leaders, who asserted that this is not the rule.

Article 243R of the Constitution clearly debars nominated members from voting in the House. Attempt to get them to vote in the House is unconstitutional. pic.twitter.com/AgxPOUdCYT