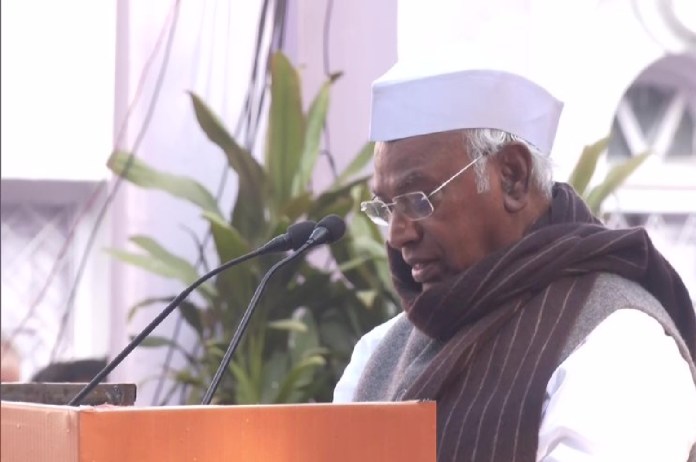 New Delhi: As the party observed its 138th foundation day, Senior leader and chief Mallikarjun Kharge on Wednesday said the grand-old party has always followed the principal of taking everyone along.

“Today India has progressed as Congress has taken the courage to break the shackles of Dalits, poor… To keep democracy strong, Pandit Jawaharlal Nehru appointed five non-Congress ministers in his cabinet. It shows the principle of taking everyone along,” said Kharge.

Congress chief Kharge hit out at the Bhartiya Janata Party (BJP) government and said that the basic principles of India are being constantly attacked.

He said that society is being divided by hate, people are hit by price rise and unemployment but the government is not bothered.

“The basic principles of India are under constant attack. A pit of hatred is being dug all over the country. People are in trouble due to inflation, unemployment but the government does not care,” said Kharge.

He further appealed to people to join the Bharat Jodo Yatra.

“To make Congress inclusive, we have to include youth, women, and intellectuals and it has already begun through Rahul Gandhi’s Bharat Jodo Yatra. This has made our rivals nervous. We appeal to people to join this Yatra,” Kharge added.

Later in the day, Kharge will also visit Mumbai on the foundation day of the party.
Indian National Congress was founded on December 28, 1885, in Bombay (Mumbai) in the presence of 72 delegates at Das Tejpal Sanskrit College.

Its founder General Secretary was AO Hume and Vyomesh Chandra Banerjee was made the President. Every year on December 28, the party celebrates its foundation day.

Congress has got a non-Gandhi President after 24 years. In 1998, Sonia Gandhi was made Congress President and in 2017 Rahul Gandhi was elected as a party president but he resigned from the post after the poll debacle in the 2019 Lok Sabha elections.

Kharge has been elected as a party president who is focusing on giving a message to the party workers on every occasion that he has started meeting the people at the party headquarters without appointments.

Recently, the party won the Himachal Pradesh polls. Although, it lost the Gujarat Assembly polls after he resumed office. By visiting the origin place on the Foundation day of the party, it seems an attempt to give a message to the workers about the party values.