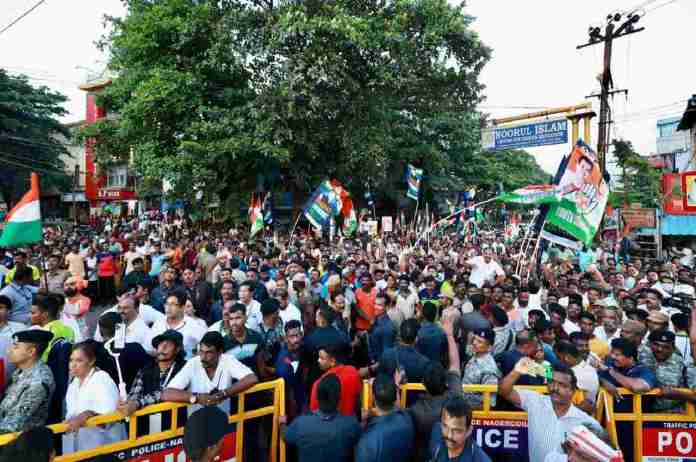 Gujarat Bandh Against Inflation: The Congress on Saturday has called for symbolic ‘Gujarat Bandh’ to register their protest against the price rise, corruption and unemployment in the state. The demonstration commenced from 8 A.M. that will continue till noon.

While addressing the people of the state, he made several promises including waiving loans of the farmers. The Congress MP also slammed the Narendra Modi-led Centre and said, “The BJP government here will waive loans of top industrialists, but have you ever heard that they have waived loans of farmers?”

“Sardar Patel was the voice of the farmers… BJP on one side makes his tallest statue and on the other side, works against people for whom he fought… if we come to power in Gujarat, we’ll waive off farmers’ debts upto Rs 3 lakhs,” said Rahul Gandhi.

Meanwhile, the Gujarat unit of Congress said, “One by one the prices of everything are increasing and common people are suffering. No one has benefited from Bharatiya Janata Party’s rule except industrialists.”

It is worth noting that Gujarat is scheduled to undergo state Assembly polls. It is estimated that the election will take place by the end of this year.

Owing to which, the party is likely to release its first list of candidates on September 15.

The Congress is aggressively holding rallies and protests in several parts of India against issues like inflation.

Gujarat | Congress workers protest in Bharuch as the party has called a ‘symbolic bandh’ today to protest against inflation and unemployment pic.twitter.com/ib8BL7TMJ0

This comes amid the Congress’ “Bharat Jodo Yatra” started from Kanyakumari with an eye toward the general election of 2024. In roughly 150 days, the 3,500 kilometer long yatra will be completed.

On Friday, former Congress president Rahul Gandhi Friday in Tamil Nadu asserted that the ‘padyatra’ is dedicated to remove hatred induced in the nation by the BJP.

Gandhi said, “For us, this yatra is to connect with the people. We have taken out this yatra against the damage and hatred that BJP’s ideology has caused to this country.”