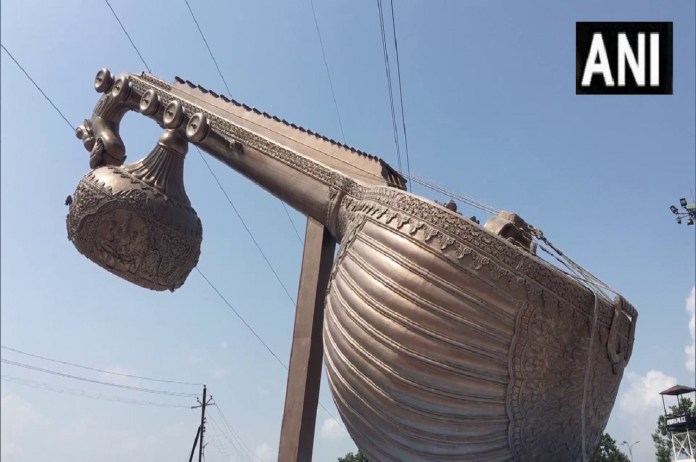 A 40-ft-long and 12-metre-high classical Indian instrument Veena, weighing 14 tonnes, engraved with a picture of Goddess Saraswati has been installed at the intersection.

Also Read: BIG BREAKING: PFI banned for 5 years along with THESE affiliated organizations

“The huge Veena of Maa Saraswati installed at Lata Mangeshkar Chowk in Ayodhya will become a symbol of musical practice,” PM Modi said while virtually addressing the inauguration programme.

The PM further added that the 92 white lotuses made of marble in the flowing waters of the lake in the chowk complex represent the life span of Lata Ji.

“I pray to Lord Shri Ram that the blessings we got from her life should continue to leave a mark on the coming generations through her melodious songs”, the Prime Minister added.

He said that Ram is about to come to the grand temple of Ayodhya and before that, the name of Lata didi, who has honoured the name of Ram among crores of people, has been established with the city of Ayodhya forever.

“I believe that the Lata Mangeshkar Chowk of Ayodhya and all such memories associated with her will enable us to feel a sense of duty towards the nation.”

The Prime Minister said that the name of Lata didi, who instituted Ram among crores of people, is now permanently associated with the holy city of Ayodhya.

The prime minister added that the late singer was one such seeker of Goddess Saraswati, who stunned the whole world with her divine voice.

PM Modi said, “I have so many memories associated with Lata didi, so many emotional and affectionate memories.”

PM Modi highlighted that the chowk in Ayodhya, named after the singer, will also serve as a place of inspiration for people associated with the world or arts and culture in the country. The place will indicate that apart from staying connected with the roots of India as well as moving towards modernity, it is also our duty to take India’s art and culture to every corner of the world, the prime minister further stated.

Taking pride in the thousands of years old heritage of India, it is also our responsibility to pass on the culture of India to the new generation, he said.

The Prime Minister expressed happiness that the place of development of Lata Mangeshkar Chowk is one of the major connecting sites of various places of cultural importance in Ayodhya. The chowk is located near Ram ki Paidi and is close to the holy stream of Saryu. “What better place to build a chowk named after Lata Didi?”, the Prime Minister exclaimed.

Paying tribute to Lata Mangeshkar, PM Modi, in an earlier tweet said: “Remembering Lata Didi on her birth anniversary. There is so much that I recall… the innumerable interactions in which she would shower so much affection. I am glad that today, a Chowk in Ayodhya will be named after her. It is a fitting tribute to one of the greatest Indian icons.”

The Bharat Ratan awardee died at a Mumbai hospital on February 6 this year at the age of 92.

Padma Shree awardee Ram Sutar designed the giant sculpture at the chowk. He is also credited with designing the Statue of Unity, the world’s tallest statue, in Gujarat.