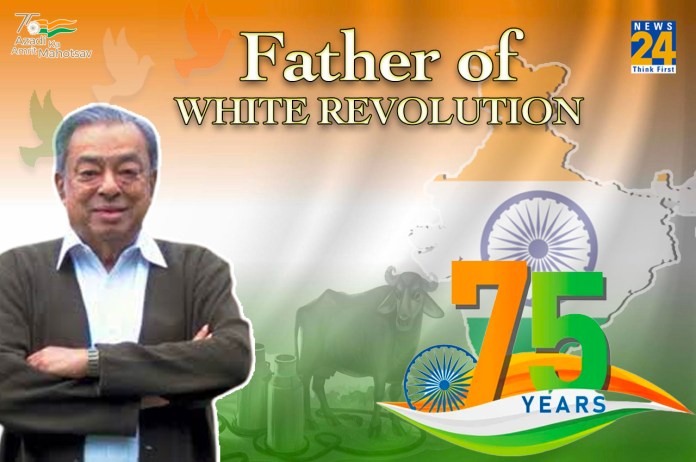 Azadi Ka Amrit Mahotsav: The “Father of the White Revolution” in India, Dr Verghese Kurien (26 November 1921 – 9 September 2012), was a social entrepreneur whose “billion-litre idea,” Operation Flood, transformed dairy farming into the country’s largest self-sustaining industry and the largest rural employment sector, contributing one-third of all rural income. It doubled the amount of milk available to each person, quadrupled milk production in 30 years, and made India the largest producer of milk in the world. Dr Verghese Kurien’s birthday has been recognised as National Milk Day in our nation since 2014.

There is no doubt that Kurien Sahib’s Amul company is doing an excellent job of delivering milk products to hundreds of people today. Our country has made significant progress in milk production around the world, and Dr Verghese deserves full credit for this.

Dr Kurien invented a new technology and produced buffalo milk powder in 1955. It was him who made buffalo powder instead of cow powder for the first time in history.

How did Kurien sahib get involved in milk production?

Kurien sahib took over the work of a dairy called Kaira District Cooperative Milk Producers Union Limited (KDCMPUL) in 1949 in order to increase milk production in India. When Verghese Kurien took over, there was a revolution in milk production. Following this, the KDCMPUL co-operative societies were formed. Given the increased milk production, the option of establishing a plant to store milk was chosen.

How was Amul chosen as name?

Kurien considered renaming KDCMPUL something that would be recognised globally. To accomplish this, he changed the name of KDCMPUL to Amul, which means “priceless,” at the suggestion of all of his plant’s employees. More than 16 million milk producers in the country are now affiliated with large milk producers such as Amul Plant. These milk producers work with approximately 1,85,903 dairy cooperative societies in India to deliver their milk to Amul. This is why Amul manufacturers are now the most widely used in the country.

The Government of India awarded Dr Verghese Kurien, the founder of Amul, the Padma Vibhushan, Padma Shri, and Padma Bhushan. He also received the Ramon Magsaysay Award for Community Leadership, the Carnegie Watler World Peace Prize, and the title of America’s International Person of the Year. Dr Verghese Kurien, the father of the White Revolution, died on September 9, 2012, but he left India with something for which he will be remembered.