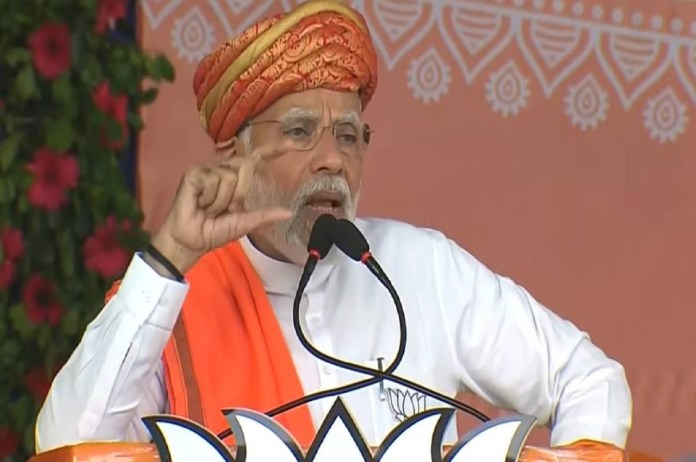 Ahmedabad: A case has been registered against three private drone flyers, who reportedly breached Prime Minister Narendra Modi’s security, during a rally in Ahmedabad.

Media reports suggested that PM Modi’s security was breached as a drone, flying at low altitude, was heading towards the stage.

The drone was brought down by the local police.

PM Modi was addressing a public meeting in Bavla, Ahmedabad today as part of the Bharatiya Janata Party’s (BJP) campaign for the upcoming Gujarat assembly elections.

According to the police, a case was registered for flying a drone against a notification that was sent out prohibiting any aerial device in the area.

The Ahmedabad Police said that the FIR has been lodged because the drone’s presence violated the notification, as reported by India Today.

“Today at Bava district Ahmedabad during the public meeting regarding the election of the Prime Minister, three persons were doing video recording by drone camera from the main road near Sabha place. The entire area of two kilometers near Sabha was notified as a “No drone flying zone” by Additional District Magistrate Ahmedabad,” the FIR read.

“On apprehending the operators of the drone and asking them to take down the drone, the three persons complied and took down the drone. No prohibited item has been found with the accused and they were outside the perimeter wall of the Sabha when they were operating the drone,” it read.

“The following three accused have been arrested in the above incident as per the Indian Penal Code Section 188 and FIR has been registered against them. The three accused on questioning told the police that there for general photography and they did not know that drones were prohibited in the area. There are no police records or previous criminal history of the persons,” the police stated, as reported by India Today.

Informing that the electronic devices have been seized, the police said that a detailed probe into the matter is underway.