BJP nominated Biplab Deb as the candidate for the by-election scheduled for September 22, hours after he was declared party in-charge for Haryana. 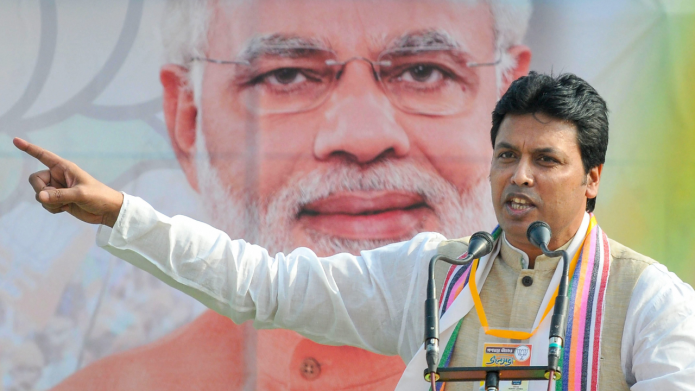 The announcement came hours after he was declared party in-charge for Haryana.

The Rajya Sabha seat in Tripura, for which by-election will be held on September 22, fell vacant after Dr Manik Saha resigned in July this year following his appointment as Chief Minister of Tripura.

BJP national general secretary and office in-charge Arun Singh, in a midnight release, said that the party’s central election body had nominated Deb as the candidate for the by-election scheduled for September 22.

“I am committed to work for the development and welfare of Tripura and it’s people.”

I am committed to work for the development and welfare of Tripura and it's people. pic.twitter.com/7K4ZloW1Vt

Meanwhile, the Left Front in Tripura has named former finance minister and MLA Bhanulal Saha as its candidate for the Rajya Sabha bypoll.

Prior to Rajya Sabha nomination, BJP appointed Deb as party’s in-charge for Haryana.

Vinod Tawde has been appointed as General Secretary in Bihar, while Harish Dwivedi continues to be the co-in-charge.

Former minister and Lok Sabha MP from Noida Dr Mahesh Sharma has been given charge of Tripura.

Ex-Tripura CM Biplab Deb to be the incharge of Haryana,ex-Gujarat CM Vijay Rupani to be that of Punjab-Chandigarh, ex-Bihar Minister Mangal Pandey to be that of WB & Sambit Patra to be coordinator of northeast states pic.twitter.com/z80tMyGYQw

Om Mathur who had been recently appointed to the Parliamentary board has been made in charge of Chhattisgarh.

Former Gujarat Chief Minister Vijay Rupani has also been given organisational responsibilities in Punjab and Chandigarh.

General secretary Arun Singh also continues to be in charge of Rajasthan.

BJP spokesperson Sambit Patra has been made coordinator for northeastern states and the party’s national secretary Rituraj Sinha will be joint-coordinator, the party said in a statement.