BJP heating up its campaigns in South India 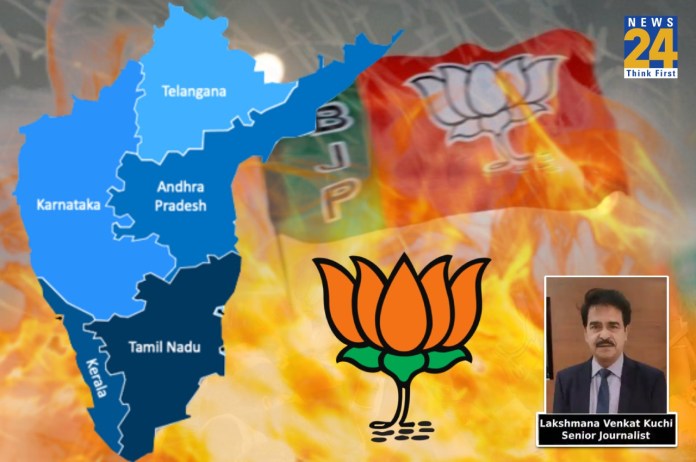 Even as north India begins to catch the cold wave, south India is heating up with politics with an determined and forceful Bharatiya Janata Party throwing in everything it has got in Karnataka and Telangana that are going for elections next year.

While Karnataka goes to polls in the first half of the New Year, Telangana Assembly’s term gets completed in the latter half and polls scheduled then. For the BJP, stakes are high in Karnataka, where the party at present is witnessing a churn with a couple of influential seniors exerting their pressure, in Telangana the BJP has launched a heated no-holds barred campaign that is already taken an ugly turn, given the foul language and low-level discourse that is dominating the political discourse.

In Telangana, the BJP is targeting both the son and daughter of Chief Minister K Chandrashekhara Rao – KT Rama Rao and K Kavitha – with corruption charges and more with the hope that some of the mud sticks. While Kavitha has been alleged to be involved in corruption in the Delhi liquor scam and being mentioned in the Enforcement Directorate chargesheet, BJP leader Bandi Sanjay has whipped up a vicious ‘white powder’ campaign against KT Rama Rao asking him to provide his blood sample to prove that he was not into drugs or to prove he was not a drug abuser.

The BJP leader’s language and content drew an equally sharp response from KT Rama Rao, who said that what if he also demanded that the Prime Minister Modi and others give their samples for drug test? This heated exchange between the two leaders – state minister KTR and Bandi Sanjay of the BJP – has degenerated into a very low level high-decibel fight that is lowering the standards of public discourse.

While on South, in neighbouring Tamil Nadu too, an interesting war of words – over time machines – has developed between the ruling DMK and the opposition BJP. The DMK has questioned as to how BJP state president, K Annamalai, who was a government servant before he entered politics, could afford to wear a watch costing Rs 5 lakh prompting an equally sharp attack on the differently costly watches worn by TN Chief Minister MK Stalin, his son and minister Udayanidhi Stalin and son-in-law Sabarish.

Annamalai reportedly told media persons, when questioned about the watch that he was ready to give the details if Stalin, his son and son-in-law explain how they were able to wear such costly and different watches to different events.

However, in poll-bound Karnataka, the BJP is at the receiving end of the flak and suffering image damage with its senior leaders threatening to rock the boat unless they are made ministers. Prominent BJP leader from politically significant Kuruba caste, KS Eshwarappa, who had to resign as a minister following a contractor’s suicide has now got a clean chit but has not been reinstated as a minister. Cut up over this, the senior MLA has demanded that he be made a minister and made threatening noises.

The senior BJP MLA has also launched a protest by not attending the ongoing Assembly session at Belagavi.

The BJP leadership is making efforts to reach out and placate him. For the present, he is holding his horses, but sources indicate that all was not well in the party with some more senior MLAs expressing apprehensions about their nominations for contesting elections.

Fortunately for the BJP, the Congress is also a divided house with its two top leaders – former CM S Siddaramahaih and KPCC chief DK Shivkumar – pulling in different directions.