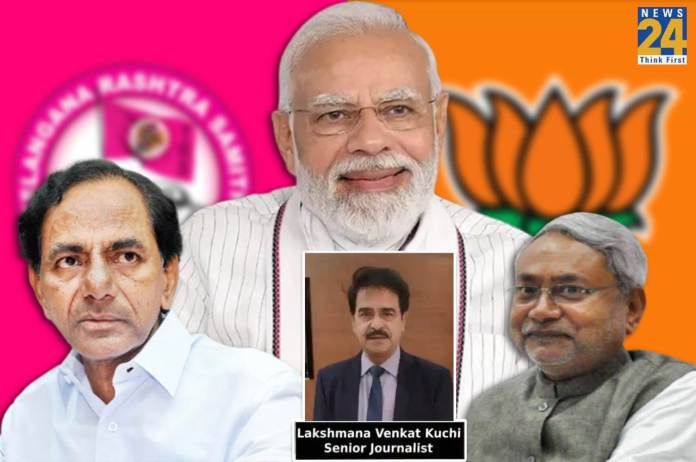 It is not just Bihar Chief Minister and JD (U) leader Nitish Kumar who saw a real threat to his own party and turf from his ally and ruling party at the centre, the BJP. An expansionist and aggressive BJP is posing a threat to almost every other regional party in different states – and most definitely in Telangana it has targeted the TRS and grow at its cost.

Which is why, Telangana Chief Minister and Telangana Rashtra Samiti supremo K Chandrashekhara Rao (KCR) and his family view the BJP with a sense of alarm and have stepped up their campaign against the ruling party at the centre and lose no opportunity to rubbish it – whether it is on local issues or national issues of importance to the people – price rise or falling value of the Indian Rupee vis-à-vis the US Dollar.

KCR and his family find themselves under a virulent attack from the BJP on the twin planks of dynastic politics and corruption with entire BJP leadership — from Prime Minister Narendra Modi down to the local district level leaders – holding the regional party as the evil that needed to be eradicated from the state. In Telangana the BJP has high expectations to improve upon its tally of four Lok Sabha seats it won in 2019 general elections.

Other than Karnataka, it is Telangana in South India where the BJP has performed well and has even put up a strong show in the recently held Greater Hyderabad Municipal Council elections. Alarmed over this, KCR launched into a frontal and direct attack on the Prime Minister as his best defence. Also, KCR made public his yearning for a national role, by his constant visits to Delhi and other places to lobby with different opposition leader and made efforts to bring them onto a single platform.

But this is work in progress, and political observers are watching him to see if he could match up to NT Rama Rao who played a pivotal role in the formation of National Front and opposition led government in the late 80s.

His central forays apart, KCR has his own turf in Telangana to protect.

In this, what helps KCR in Telangana, unlike other opposition politicians in the Hindi belt, is his ownership of a strong media outlet like rest of the politicians and political parties in South India. Besides, as the CM and party in governance he has significant leverage over the local vernacular press that makes a difference. In the state he can match and even beat the BJP in the propaganda game.

This is a luxury that most of the regional parties in North, and Congress party in general across India, and in Gujarat in particular, does not have. Gujarat also goes to later this year.

With local Telugu media support, KCR launched into a blistering attack on the Prime Minister — using the same facts that were used by Modi as the Prime Ministerial candidate used in the run up to 2014 Lok Sabha general elections. In fact, KCR also makes full use of Modi’s video clips and poses several probing questions, and to highlight the unfulfilled promises that the PM made as a campaigner in the last general elections.

KCR has been cornering the Prime Minister like no one else. He fact checks Prime Minister’s statements and asked pointed questions, whether it is on price of crude oil, general price hike or the falling value of the Indian Rupee vis-à-vis the US Dollar.

The dramatic developments in Bihar, for sure, have come as a morale booster for KCR and his family. They are battling the BJP and trying to block its expansion. Both his son and a key minister KT Rama Rao (KTR) and his sister Kavitha have congratulated the new dispensation in Bihar, that they view as a welcome change of guard.

In fact, the way the BJP was outwitted in Bihar by Chief Minister Nitish Kumar sure sends out a signal to the leaders of other political parties that the BJP can be checked, if one was brave, fearless, and combative.

On this score, Telangana Chief Minister is showing he is no lilliput and neither does his son KTR holds back any punches.

But cautions political analyst and Vice Chancellor, Jagran Lakecity University and National Coordinator Lokniti Netowork, Sandeep Shastri on reading too much into the Bihar developments and extrapolating them onto the nation and or even other states. Each state elections and politics are different and specific it to. Which is why the BJP has a different strategy for each state, even during Lok Sabha elections, and the Congress and other parties have to rethink their strategies for this,” Prof Shastri said.

And if the opposition gets caught in Modi versus X or why, personality contest, the race for 2024 will be over before it begins, as the BJP and Modi are miles ahead. Instead, the opposition must counter the BJP on issues, perspectives and narratives rather than on personality, he said.

But in Telangana, KCR and his family are drawing inspiration from the Bihar development and express happiness that finally someone blocked the “backdoor politics of the BJP.” For sure, this is a development that they also worry about, what if it were to take place in their state.

The Bihar development, KCR’s daughter Kavita said, was a positive change for the entire nation, because the era of backdoor politics has been countered very well by Nitish Kumar.” She said, Nalanda has always shown the way to the world, and now Bihar has shown the way to the country. I hope it gets repeated everywhere else.”

For the present, the focus and attention of the party is on Munugode assembly byelection, whenever it is held. Munugode assembly seat fell vacant after sitting Congress MLA K Rajagopal Reddy resigned and announced intentions to join the BJP. The BJP is expected to field him from the same seat, and this has become a prestige battle for the TRS as also it will be a litmus test for the BJP, as to where it stands in the state, and it will be interesting to watch if people would endorse turncoats.