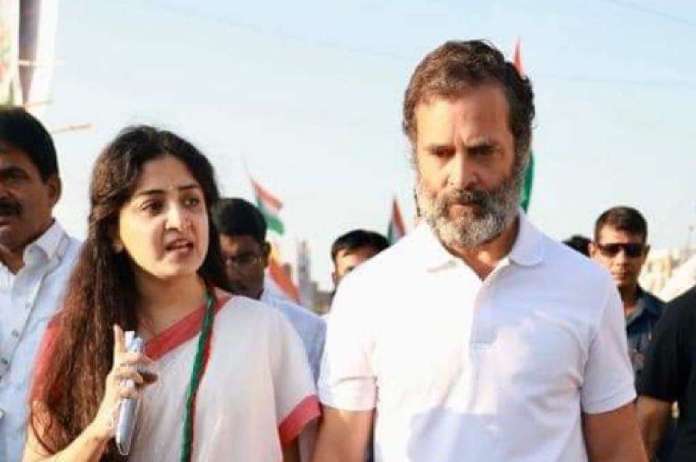 Bharat Jodo Yatra: A Bharatiya Janata Party leader, Priti Gandhi, was trolled for making a distasteful remark about a photograph of Congress leader Rahul Gandhi and actress Poonam Kaur. On the one hand, social media users chastised her severely, while the Congress party also condemned her. The criticism was heaped on the BJP leader for inappropriately commenting on the photo from the Bharat Jodo Yatra.

Adding to the BJP leader’s concerns, actress Poonam Kaur came forward and responded appropriately to Priti Gandhi. She explained why Rahul Gandhi had held her hand during the Bharat Jodo Yatra.

Poonam wrote, “This is absolutely demeaning of you , remember prime minister spoke about #narishakti – I almost slipped and toppled that’s how sir held my hand.”

This is absolutely demeaning of you , remember prime minister spoke about #narishakti – I almost slipped and toppled that’s how sir held my hand . https://t.co/keIyMEeqr6

The photograph of actress Poonam Kaur and Congress leader Rahul Gandhi taken during the Bharat Jodo Yatra has gone viral. Both are seen holding each other’s hands in the photo.

Priti Gandhi, a Karnataka BJP leader, made an unflattering remark about this image on Twitter. “Following in the footsteps of my great-grandfather!” she wrote on her social media account.

Supriya Shrinet, a Congress leader, also responded to Priti Gandhi’s tweet. “Yes, he is following in the footsteps of his great-grandfather and uniting this great nation of ours,” she wrote on Twitter.

She wrote a piece about Priti Gandhi “Your childhood sorrows are profound and evidence of your spoiled mind. You require medical attention.”

Apart from that, Srinivas BV, President of the Youth Congress, stated, “It is a matter of shame that she is a woman.”