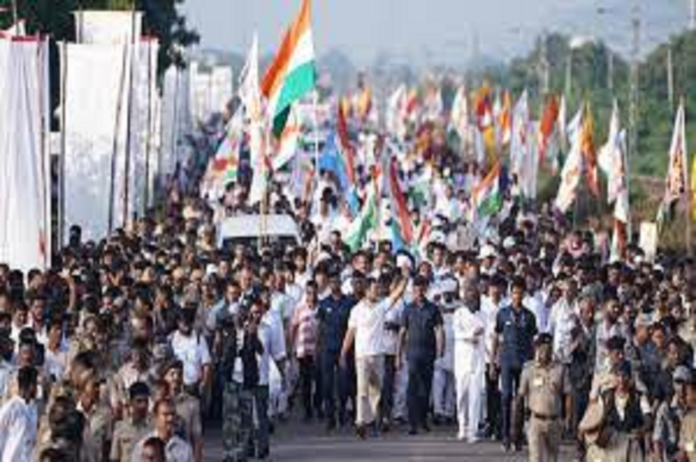 New Delhi: The Congress’s “Bharat Jodo Yatra,” which is being led by former Congress President and MP Rahul Gandhi, is in its 55th day today. Over 1,250 kilometres have been covered in Rahul Gandhi’s bharat jodo yatra across India.

The Bharat Jodi Yatra of the Congress is currently in Telangana. Through Tamil Nadu, Kerala, Andhra Pradesh, and Karnataka, this journey has now arrived in Telangana. On November 7, the “Bharat Jodo Yatra” will enter Maharashtra. On November 4, there will be a day of respite during the yatra.

In Telangana, today marks the sixth day of the yatra. Today, Rahul Gandhi began his journey from the Math temple in Shamshabad, Telangana. Rahul Gandhi was present during this, along with Congress workers.

Congress MP Rahul Gandhi from Kanniyakumari, began the Yatra on September 7 and would finish it in Kashmir the following year, travelling 25 miles daily.

A historic occasion for the Congress and the entire nation, the 3500 km yatra. According to a statement from the Congress, it is the longest foot march by a politician in Indian history.

Telangana is currently the starting point of the Bharat Jodo Yatra, a national unification campaign launched by the Congress.

It departed at six in the morning from the Shadnagar Bus Depot camp, and it will stop for its first break at Papyrus Port in Kothur.

The Congress stated earlier that the Bharat Jodo Yatra was the longest foot march by a politician in Indian history.

After starting in Tamil Nadu, the yatra has already travelled through sections of Kerala, Karnataka, and Andhra Pradesh. The yatra’s subsequent leg will travel through Maharashtra.