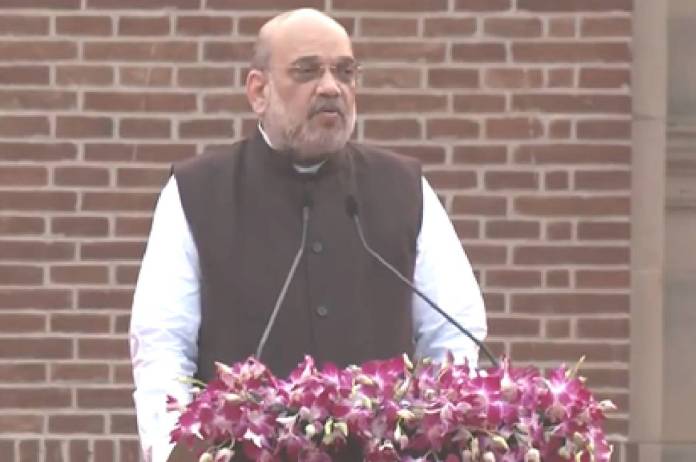 New Delhi: Union Minister Amit Shah Monday offered condolences to the families of those who lost their lives in the Morbi hanging bridge collapse incident in Gujarat on Sunday.

Said the Union Minister: “Several people lost their lives in yesterday’s incident in Gujarat. First of all, I express condolences to families of all those who died in the unfortunate incident. May all those who died, rest in peace.”

#WATCH | Delhi: Union Home Minister Amit Shah says, “Several people lost their lives in yesterday’s incident in Gujarat. First of all,I express condolences to families of all those who died in the unfortunate incident. May all those who died, rest in peace”#MorbiBridgeCollapse pic.twitter.com/9mRauVDib6

Gujarat Home Minister Harsh Sanghavi informed on Monday that a criminal case has already been filed in connection with the incident.

He said, “An investigation has begun today under the leadership of Range IGP,” Sanghavi said. Everyone worked all through the night. The Navy, NDRF (National Disaster Relief Force), Air Force and Army arrived at the spot quickly. More than 200 people have worked the entire night for search and rescue operations.”

As per the latest data, the death toll has reached 132. Meanwhile, the rescue operation is still on to find more people lost during the accident.

According to information provided by the district government, the system was instantly triggered following the accident, and rescue efforts were initiated with the assistance of residents.

After the bridge collapsed, teams from the Army, Navy, Air Force, NDRF, and Fire Brigade investigate through the night for the Garkaw victims in the Macchu river, according to officials.

Following the bridge collapse, the Rajkot Municipal Corporation boat arrived in Morbi with emergency supplies, including life jackets, and the rescue effort was initiated.