Students claimed that Allahabad University has increased the under-graduate fees by almost 400 percent. 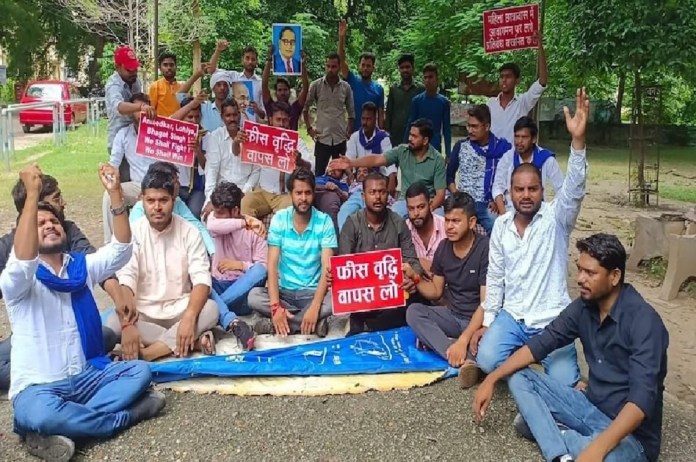 Prayagraj: Some students from Allahabad University continued their protest on Tuesday against the administration’s decision to hike fees for various courses.

In videos circulating on social media, it is seen that students are vowing to continue demonstrations until their demands are met.

On Monday, a student leader of Allahabad University tried to immolate himself amidst the protest over the fee hike for various courses in the 2022-23 academic year.

The student leader, identified as Adarsh Bhadauria, is a undergraduate final year student, who is also a member of National Student Union of India (NSUI), the student outfit of Congress.

In UP's Prayagraj, a student among protestors agitating against the multi-fold fee hike at the Allahabad university tried to immolate himself. The police on the spot rescued him. pic.twitter.com/0MbzTInWfa

“Adarsh Bhadoria who was one of the students staging protest, attempted self immolation inside the university campus. He was stopped from doing so and detained,” Superintendent of Police (City) Santosh Kumar Meena said.

Students claimed that Allahabad University has increased the under-graduate fees by almost 400 percent. The decision by the university was taken on 31st August. The students demanded the withdrawal or reduction of the fee hike within ten days of announcement.

However, when the administration ignored students’ demands, the latter decided to protest against the decision.

The police later cleared the area and removed the protestors from the site.

Police lodged a case regarding the incident and initiated an investigation.

Meena said the university administration has also filed a complaint against some people including university students for disturbing peace inside the campus.

How much fees increased fees after the new decision

University’s argument over the fee hike

University administration, in its response, said that at present the same tuition fee is being charged from the students, which was taken in 1922 (100 year ago). Students here can still study traditional courses for a whole year by spending about ten rupees a day.

Moreover, the university says it has the lowest fee compared to the fees of other central universities.

Congress leader Priyanka Gandhi Vadra had on September 12 said fee hike is another move by the BJP government against the youth.

The 400% fee hike in Allahabad University is another anti-youth move of the BJP government. Children from ordinary families of UP-Bihar come here to study. By increasing the fees, the government will take away a major source of education from these youth.

The government should immediately withdraw the decision of increasing the fees after listening to the students,” she said.

“The way Allahabad University is trying to crush the students’ movement in protest against the one-time huge increase in fees is unfair and condemnable. The UP government should renounce its autocracy and sympathetically consider the legitimate demands of the students, the demand of BSP,” she said.