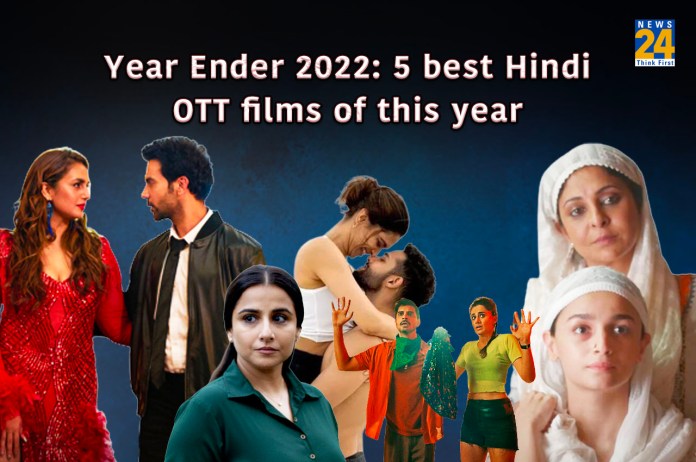 Year Ender 2022: For the third consecutive year, streaming services continued to offer options for moviegoers who want to watch movies at home. From the chawls of Mumbai to the vibrant lanes of Goa, we take a look at some of the best Hindi digital releases of this year.

Vasan Bala’s Monica, O My Darling features an exciting conflict between ambition and murder. The Hindi movie, which is an adaptation of Keigo Higashino’s novel Burutasu No Shinzou, centres on employees of a robotics business who are up to no good. The person with the most to lose is Jayant Arkhedkar, who manages to have an affair with his secretary Monica while secretly romancing the business owner’s daughter.

The tale of an abusive union between Badru and Hamza, in which the husband holds all of the power before it doesn’t. With assistance from her mother Shamshu, a revitalised Badru teaches her husband a lesson.

The film’s high point is the conversations between the mother and daughter, which are made possible by their humorous speech. The karmic ending of Alia’s and Jasmeet K Reen’s debut film as a filmmaker and producer is particularly beautiful.

In Shakun Batra’s Gehraiyaan, infidelity and family secrets come to light and reveal disturbing revelations. After eight years apart, cousins Alisha and Tia reconcile, as well as with each other’s boyfriends. Alisha and Zain, Tia’s fiancé, start an unwise relationship that affects them all in the long run. The Hindi drama immerses viewers in the life of the wealthy and affluent while also shocking and awe-inspiring them with its emotional depth.

Two ladies whose lives are already intertwined are affected negatively by a hit-and-run accident. Jalsa, a thriller by Suresh Triveni, centres on journalist Maya, who struggles with her guilt after an error in judgement. Jalsa focuses on the lives of two distinct mothers from different social backgrounds who merely want to see their kids happy.

As authorities look for the person who caused the catastrophe, money and guilt go hand in hand. Jalsa keeps you on edge the entire time because of the compelling performances of its stars, Vidya and Shefali Shah as Maya’s maid Ruksana. The seasoned performer Rohini Hattangadi is excellent as Maya’s adoring mother.

Looop Lapeta, a time-travelling story, is an authorised remake of the German movie Run Lola Run from 1998, however, it deviates from the original to fit into its new Indian setting in Goa. In the movie, “Bending Time,” Taapsee Pannu plays the role of Savi, a former athlete who tries to rescue the life of her foolish boyfriend Satyajeet after he wastes $50,000 that belonged to his mobster boss.