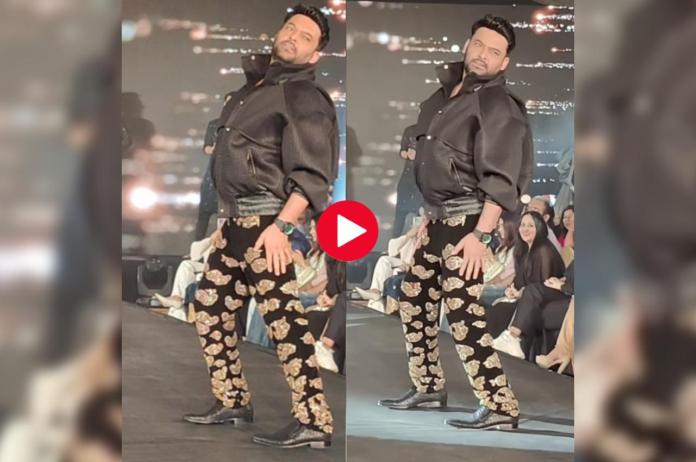 New Delhi: Comedian Kapil Sharma, who always make everyone laugh with his comedy recently turned into showstopper as he made his ramp walk debut with Anu Ranjan’s The Beti Fashion Show. Taking to Instagram, paparazzi account name ‘ViralBhayani’ shared video of Kapil in which he is walking on the ramp. In the video, he opted a black jacket, black and golden pants and shoes.

In a clip, as he started walking towards the audience and greeted them and ended with a seductive pose and soon he turned around, started laughing. He also seen walking with the other models and gave a pose for the camera.

In another video, speaking at the event, Kapil recalled his childhood and said, “When my father used to wake up my sister for school, it would start with foot massage. But with us, he wouldn’t even see on which side we had our face under the blanket, he would just pull us up. But now I can relate after becoming a father. At first, someone else’s daughter came into my life, my wife, and then I was blessed with a beautiful daughter, Anayra… This is my first ever ramp walk, so far I have only walked on the streets.”

Also Read :- Urvashi Rautela gets invited by Billionaire Elon Musk to the prestigious AmFAR Gala- Check out the video now

Earlier, Kapil has shared a glimpse of his makeover from his upcoming new season show ‘The Kapil Sharma Show’ Taking to Instagram, Kapil dropped a photo in which he opted black T-shirt paired with matching pants and layered with a white coat, completing his look with black sneakers and shades. “New season, new look #tkss #comingsoon,” he captioned the post.

On the work front, he will be seen in Zwigato, written and directed by Nandita Das. The film also stars Shahana Goswani.