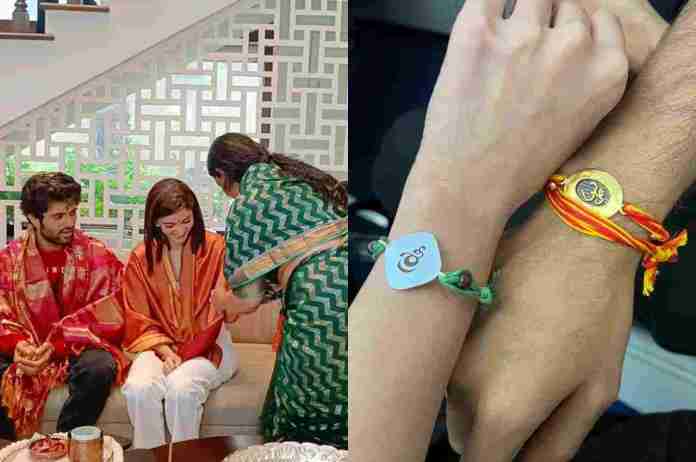 New Delhi: Ananya Panday and Vijay Deverakonda are leaving no stone unturned  in promoting their upcoming film Liger. Vijay’s mother, Madhavi Deverakonda, on Wednesday, held a pooja at their Hyderabad home which was also attended by Ananya.
Vijay and Ananya also put on ‘sacred band’ on their wrist after performing the pooja ceremony. Later, the actress took to Instagram to thank Vijay’s ‘amma’ for a wonderful pooja ceremony. Ananya looked super cute in a white outfit while Vijay was his uber cool self in a traditional attire.

In the first picture, the ‘Liger’ stars could be seen sitting on the couch with joined hands, smiling faces and red shawls on their shoulders. In the picture, a group of priests could be seen standing in front of them. In the second picture, the ‘Pati Patni aur Woh’ actor can be seen in a happy mood, as Vijay’s mother ties a band to her hand as a sign of blessing.

The Gehraiyaan actress posted a few pictures on social media handle which she captioned, “Blessings from Vijay`s amma @deverakonda and a pooja at his home in Hyderabad for #Liger #Thankful #Grateful #Blessed thank you auntyyyyy.” Arjun Reddy actor also shared the picture on his Instagram story, which he captioned, “This whole month touring across India and receiving so much love already felt like god’s blessing! But mummy feels we needed his protection as Pooja and sacred bands for all of us. Now she will sleep in peace while we continue our tour #Liger.”

Talking about Liger, Puri Jagannadh has directed the film. Co-produced by Karan Johar, Charmme Kaur, Apoorva Mehta, and Hiroo Yash Johar under Puri Connects and Dharma Productions, the film also has a cameo from Mike Tyson.

The film will be released in theatres worldwide on August 25, 2022.