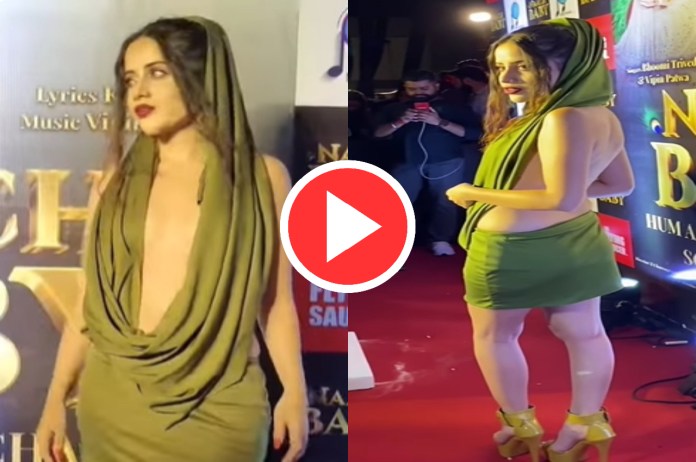 New Delhi: Social media sensation Urfi Javed has become the centre of discussion these days. Urfi’s video has emerged as the talk of the town with her intimate fashion sense. Once again, Urfi is creating panic with her bold look. This video clip of the actress is covered in the internet world.

Urfi Javed, recently attented at Sunny Leone’s event ‘Naach Baby,’ in an olive green colour backless dress, in which she is looking very hot. In this backless outfit, Urfi has given more than one sizzling pose.

This video of the actress has been shared by Viral Bhayani. This bold look of Urfi is making a lot of headlines and the fans loved this outfit. Although many users trolled her for this bold look.

While posing on the red carpet, the paps commented on her outfit which she heard. The actress got upset about it and started losing her cool with the photographers. A video of the same shared by Viral Bhayani has now gone viral on social media.

In the video, she said, “Guys I am not coming here for this. Tumhein agar comment karna hai na toh apni girlfriend aur maa-behen ke ghar pe jaake karo. Mere kapdon pe koi comment nahi karega. (If you want to comment, go to your girlfriend or mother or sister’s house to comment on them. No one will comment on my clothes anymore.) One more comment from any one of you and that’s it. I give you guys so much respect and this is what I am getting back?”

Recently, Urfi appeared at the grand launch party of Jhalak Dhikhhla Jaa 10, where she got into a nasty fight with her ex Paras Kalnawat, who is one of the contestants on the show.

On the work front, Urfi Javed was recently seen in a music video with her alleged singer boyfriend Kunwar. Apart from this, she has appeared in many television shows including ‘Bade Bhaiya Ki Dulhania’, ‘Meri Durga’, ‘Bepnaah’ and ‘Punch Beat Season 2’.