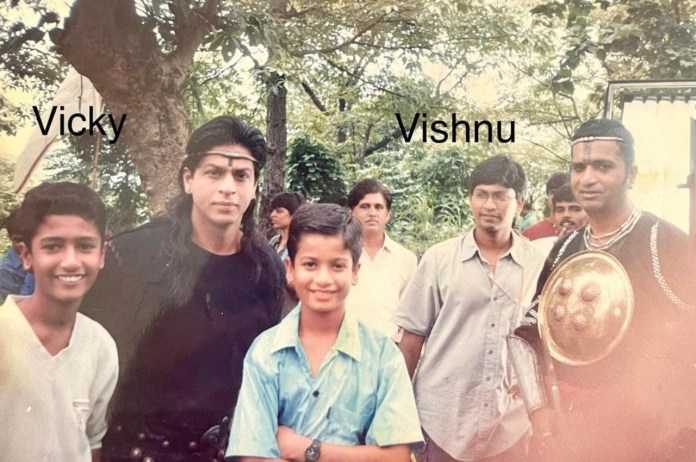 New Delhi: Vicky Kaushal’s father, action director Sham Kaushal, frequently goes into nostalgic trips and brings out some good old gems to share with fans. On Thursday, Sham Kaushal took to Instagram to post a photo of his son Vicky Kaushal with director Vishnuvardhan from the set of Asoka (2001). A much younger Vicky Kaushal and Sunny Kaushal can be seen posing with Shah Rukh Khan in the photo. Vishnuvardhan, who worked as an associate director on the film, can also be spotted in the video. They’re all grinning for the camera.

Along with the throwback picture, Sham Kaushal penned a note expressing his happiness on Vicky and Vishnuvardhan’s win at the Filmfare Awards. “By God’s grace this photo was taken in 2001 during the shooting of Asoka in Film City. Vishnu Vardhan was asstt director & Vicky was studying in 8th standards. No body ever imagined that one day Vicky will join film line & in 2022 both of them will be winning Best Director & Best Actor Awards respectively for Shershah & Sardar Udham. Destiny & God’s blessings #vishnuvardhan @vickykaushal09 Rab di meher,” he captioned the picture.

For the unversed, Vicky Kaushal made his Bollywood debut with Masaan. The critically acclaimed film garnered him nationwide recognition. Some of his other notable works include Uri: The Surgical Strike, Sanju and Udham Singh.

Sunny Kaushal, on the other hand, ventured in Bollywood with Sunshine Music Tours And Travels. The actor garnered critical acclaim with his film Shiddat.