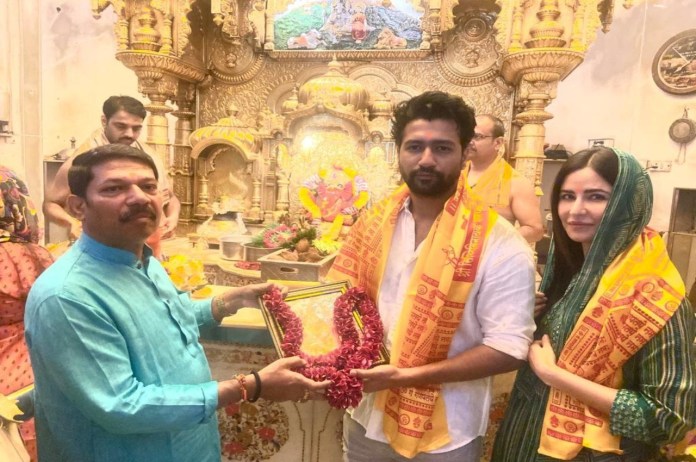 New Delhi: Vicky Kaushal and Katrina Kaif started the year 2023 on a spiritual note after spending a significant amount of time in the woods over the New Year. Pictures of the couple inside the Siddhivinayak temple in Mumbai, where they went to pray, are becoming popular on social media. For the spiritual outing, Katrina chose a lovely green suit, while Vicky was seen wearing a white shirt and khakhi pants.

Last month, Katrina Kaif and Vicky Kaushal had taken off to Rajasthan. Sharing the pictures, Katrina wrote,  “So Magical ….. I think one of my favourite places ever.” The couple marked their first wedding anniversary on December 9, 2022.

Regarding her professional life, Katrina Kaif will soon be featured in “Tiger 3,” which also stars Salman Khan. This year’s November premiere of this action comedy is scheduled. Additionally, she is planning to release “Merry Christmas” by Sriram Raghavan. In this thriller, Vijay Sethupathi and Katrina will be in the same frame. With Priyanka Chopra and Alia Bhatt, Katrina Kaif will also begin the filming of the Farhan Akhtar-directed movie “Jee Le Zaraa” this year. Vicky Kaushal is now working on Meghna Gulzar’s upcoming film “Sam Bahadur,” which stars Sanya Malhotra and Fatima Sana Shaikh. He will also appear opposite Sara Ali Khan in Laxman Utekar’s upcoming film.