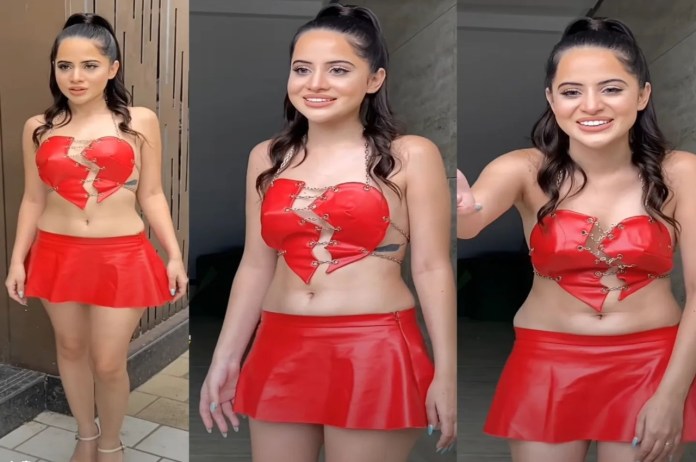 New Delhi: Bigg Boss OTT fame Urfi Javed has become a social media sensation. Urfi, who created a sensation with her strange clothes, is back once again with unique theme. She always remains a topic of discussion and her videos are becoming viral.

Many paparazzi pages have shared videos of Urfi Javed, in which she can be seen chit-chatting with paps.

Urfi Javed’s latest look is raising the temperature of social media and once again flaunting her toned body in this revealing dress.

Talking about Urfi Javed’s latest outfit, She opted for a red-coloured cut-out skirt top. The outfit of the actress has been made with the help of chains and some at-outs, which have been given the shape of a broken heart emoji. She completed her look by tying a high ponytail with heavy eyelashes, nude lips and light makeup.

Earlier, Urfi was spotted at Sunny Leone’s event ‘Naach Baby,’ in an olive green colour backless dress, in which she is looking very hot. In this backless outfit, Urfi has given more than one sizzling pose.

One fan praised her look and wrote, “Love her dressing sense” and many have dropped heart and fire emojis on the comment section.

On the work front, Urfi Javed was recently seen in a music video with her alleged singer boyfriend Kunwar. Apart from this, she has appeared in many television shows including ‘Bade Bhaiya Ki Dulhania’, ‘Meri Durga’, ‘Bepnaah’ and ‘Punch Beat Season 2’.