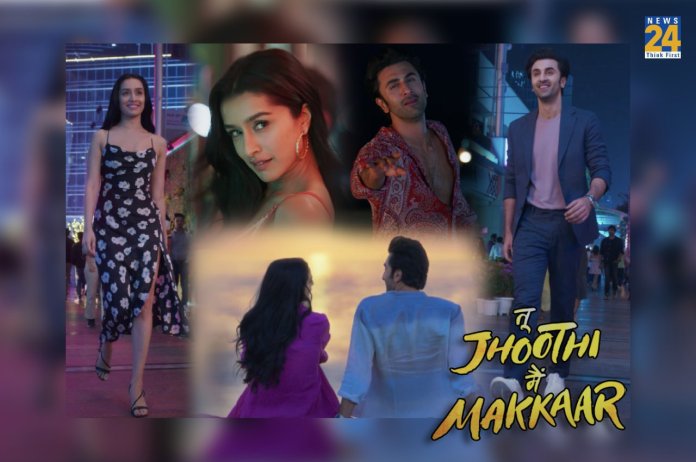 Tu Jhoothi Main Makkaar Trailer: The makers of Ranbir Kapoor and Shraddha Kapoor starrer Tu Jhoothi Main Makkaar have unveiled its trailer on January 23. The film is about present-day love relationships with a punch of wit. How a ‘Player’ (Ranbir Kapoor) in the world of romantic relationships finds a girl (Shraddha Kapoor) who’s a worthy opponent, falls for her and screws his life is the high point of the plot.

Now coming to the trailer, the video begins with Ranbir and Shraddha kissing each other while sitting on a beach side, followed by the former’s monologue, “Aaj Kal relationship mein ghusna assan hai, usme se nikalna mushkil…rishta jodna assan hai, todna mushkil.” The clip soon shifts to Ranbir’s character teaching his friend how to come out from a relationship without becoming the culprit in the mess. Meanehile, he meets a girl, played by Shraddha, who is also a master in the game of love. While Ranbir falls for her eventually, Shraddha plays it well. What will happen next is the high point of the film.

Meanwhile, the creators of Tu Jhoothi Main Makkaar intend to debut the trailer for the upcoming movie alongside Pathaan in theatres after delighting fans with the teaser. With a fresh poster, film critic Taran Adarsh announced the news on Instagram. “TJMM’ TRAILER WITH ‘PATHAAN’â€¦ Trailer of #LuvRanjan’s #RanbirKapoor – #ShraddhaKapoor starrer rom-com #TuJhoothiMainMakkaar will be attached to #Pathaan by #YRF, who are distributing both filmsâ€¦ #TJMM releases worldwide on #Holi 2023 (sic),” he wrote.

Earlier, Pinkvilla revealed that Tu Jhoothi Main Makkaar Trailer will be launched on January 23 at a grand event in Mumbai. A source close to the development told the media portal, ‘…The launch will happen in the presence of Ranbir Kapoor, Shraddha Kapoor, and the team. It’s going to be a special launch with a specific theme, and the team has planned ample of fun activities to bring out their romantic comedy to the audience.”