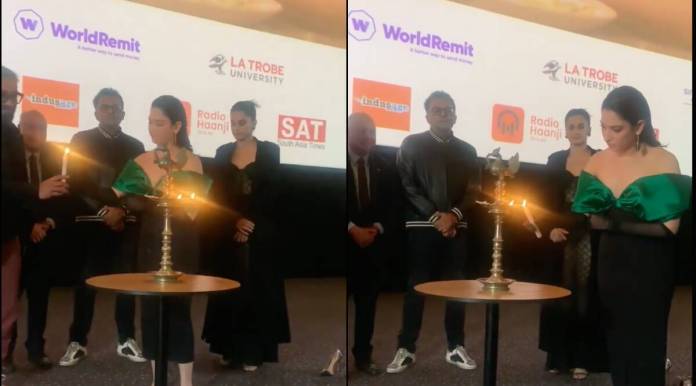 New Delhi: Tamannaah Bhatia is known for her versatile roles and impeccable screen presence across industries in Indian cinema. The Baahubali actor enjoys a major fan following across the world. Now, a video of Tamannaah has left all her fans impressed. In the video, Tamannaah is seen removing shoes before lighting a lamp at Indian film festival of Melbourne and it has impressed netizens.

In the video, Taapsee can be seen lighting a portion of the bulb before calling Tamannaah to do the same. Tamannaah then removed her shoes before taking the candle from Taapsee and walked forward to ignite the lamp. A woman standing nearby appreciated her gesture as well. “It’s just South Indian custom,” Tamannaah said. Tamannaah then lit the lamp barefoot. Fans were totally in awe of Tammannah’s gesture and showered her with compliments in the comment section. “Really nice to see Tammanah removing her sandals before lighting candle,” wrote one person. “Wow, small things matter… great gesture by Tamannaah,” a fan mentioned. he deserves an big Appluase,” another netizen mentioned.

The Indian Film Festival of Melbourne (IFFM) 2022 is now in its 13th year. On Sunday, the awards ceremony was held in Melbourne’s renowned Palais Theatre. This year’s gala was presented by television personality Rithvik Dhanjani. For those who are unfamiliar, the IFFM is an annual event hosted in Australia that celebrates the Indian entertainment sector by displaying a diverse selection of events, films, and series from the nation. The IFFM Awards 2022 were won by the sports drama ’83’ and the suspense film ‘Jalsa.’ Ranveer Singh was named best actor for his portrayal of Indian captain Kapil Dev. Shefali Shah won best actress for her performance in Jalsa.