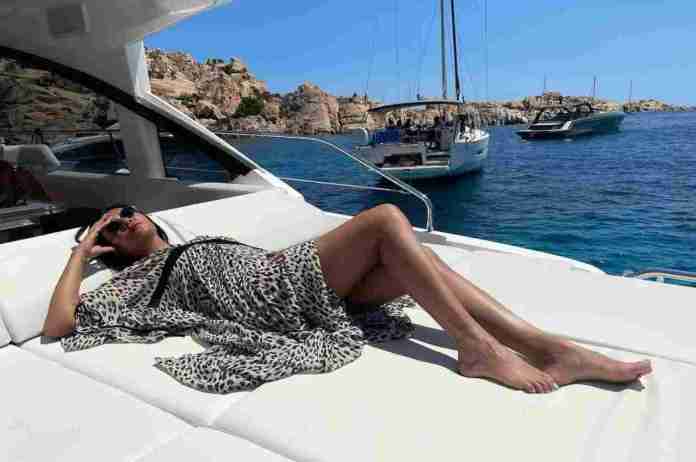 New Delhi: Sushmita Sen has been making headlines ever since Lalit Modi made their romance public. The couple is having the best time of their lives vacationing around the globe. On Thursday, the former Miss Universe took to her Instagram to share a glimpse into her intimate holiday in Sardinia. Sushmita shared two pictures from her recent holiday; a close-up selfie and a picture of herself in a luxurious yacht. “Sen and the Italian Sun” she captioned the post. Her post reacted love reaction from her brother’s estranged wife Charu Asopa.

Post acknowledging her relationship with Lalit Modi, Sushmita has frequently been sharing holiday pics. Earlier, the Arya had posted a reflective note post she attracted flake for her relationship with the business tycoon. Sharing a picture of herself in a swimwear as she stood in the midst of a sea, Sushmita wrote, “Perfectly centred in my being & my conscience…I love how nature merges all it’s creation to experience oneness…and just how divided we are, when we break that balance.”

After revealing that she is in a ‘happy place’ and ‘not married’, ‘no rings’. Bollywood actress, Sushmita Sen who’s dating business man Lalit Modi, Dropped another picture on her Instagram handle.

After revealing that she is in a ‘happy place’ and ‘not married’, ‘no rings’, the actor posted a picture, clicked by daughter Alisah Sen, facing an infinite sea in a white lace kaftan with her hair tied in a bun. As the actor enjoyed the serene beauty, she wrote, “Ah Serenity & the power of noise cancellation!!! Picture courtesy: Alisah Sen. I love you guys beyond!!!” with the hashtags #sharing #bliss #positivity #love #duggadugga #trulyblessed.”

On July 14, Lalit Modi posted a series of pictures from Maldives with Sushmita Sen revealing their relationship status. He wrote the caption, “Just back in London after a whirling global tour #maldives # sardinia with the families – not to mention my #betterhalf @sushmitasen47 – a new beginning a new life finally. Over the moon. In love does not meaning marriage YET. BUT ONE THAT BY GODS GRACE WILL HAPPEN. I JUST ANNOUNCED THAT WE ARE TOGETHER.’’

On the work front, Sushmita Sen is expected to feature in the next season of Aarya and the preparations for the same have already begun. Just last week, the Third Season Of Aarya, was officially announced.