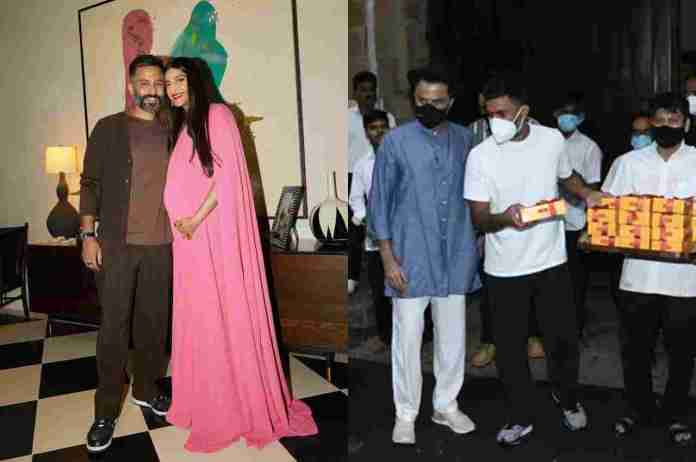 New Delhi: Sonam Kapoor and Anand Ahuja are the town’s newest parents. The Delhi 6 actress gave birth to a baby boy on August 20, and social media has been flooded with congratulations for the couple since then. Rhea Kapoor recently took to Instagram to share a couple of pictures straight from the hospital, revealing Sonam and Anand’s little prince. Sonam appears to be returning home with her baby today. Photos of her car leaving the hospital have surfaced.

On Friday afternoon, Sonam and Anand brought her newborn son home from the hospital. Anil Kapoor, along with his son-in-law Anand Ahuja, were spotted distributing sweets to paparazzi stationed outside Sonam’s father Anil Kapoor’s Mumbai residence. They smiled as they approached the paparazzi.

Sonam Kapoor and Anand Ahuja announced the news of their baby’s arrival in an Instagram post. The statement read: “On 20.08.2022, we welcomed our beautiful baby boy with bowed heads and hearts. Thank you to all of the doctors, nurses, friends and family who have supported us on this journey. It’s only the beginning but we know our lives are forever changed – Sonam and Anand.”

Sonam’s dad Anil Kapoor shared the big news like this. He wrote: “We are delighted to announce, on the 20th of August 2022, of the arrival of the newest member of our family. Sonam and Anand have been blessed with a healthy baby boy and we couldn’t be more elated. Our hearts are bursting with pride and love for the new parents and their beautiful angel. Doting grandparents Harish and Priya, Anil and Sunita. Excited aunties and uncles Rhea and Karan, Anant and Harshvardhan.”