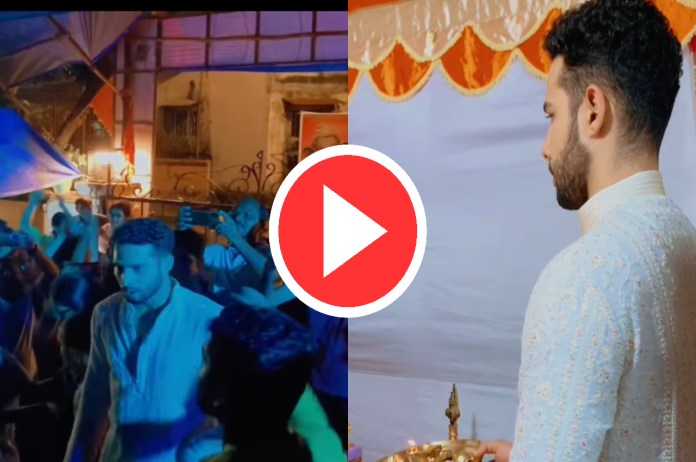 New Delhi: With the festive fever going on, Siddhant Chaturvedi too took to his social media and shared a clip of him doing Pooja, dancing with his friends and family in the Ganapati Visarjan.

Reacting to the post, a netizen wrote, “Sanskari, haaaayyyeeee! #kurta.” Another wrote, “Bro aapka dance.” Many dropped heart and fire emojis in the comment section.

In a recent interview with a leading publication, while talking about his experience of dancing to the dhol of Nashik Dhol during Visarjan Siddhant said, “This experience was very different from the earlier ones when we would take the idol from Goregaon to Powai in a truck. Through the journey, my friends and I would dance barefoot on the streets to the tunes of Nashik dhol, smear gulal on each other and have vada pav on our way back”

Later, he also added how the festival played an important role in his life saying “I have a lot of respect for the stage here as this is where I was groomed. While I did theatre, it was on this stage that I danced, hosted and acted in plays while growing up. It also taught me teamwork. In these seven days, you feel like you are a part of a community… there’s this feeling of belonging and being rooted.”

Talking about his future lineups, Siddhant will be next seen in ‘Phone Bhoot’ with Katrina Kaif and Ishaan Khatter and ‘Yudhra’ where he takes on a heavy dose of action. Helmed by Gurmmeet Singh. The film will release on November 4, 2022.

Talking about his experience while working with Katrina, Siddhant recently revealed on Koffee With Karan 7, “I was very nervous to work with Katrina, at first.” Comparing his work experience with Deepika Padukone in Gehraiyaan to Katrina in Phone Bhoot. They are two distinct superstars. For me every film is the first film, I have worked with Ranveer and Alia in my first and then Deepika, and Katrina.”

“I think it was the first time we did the scene together. I was very nervous, because Vicky (Kaushal) was there,” he added.