Sara Ali Khan recently spent some quality time with her mother Amrita Singh in Florence. The actress shared glimpses from her vacation. 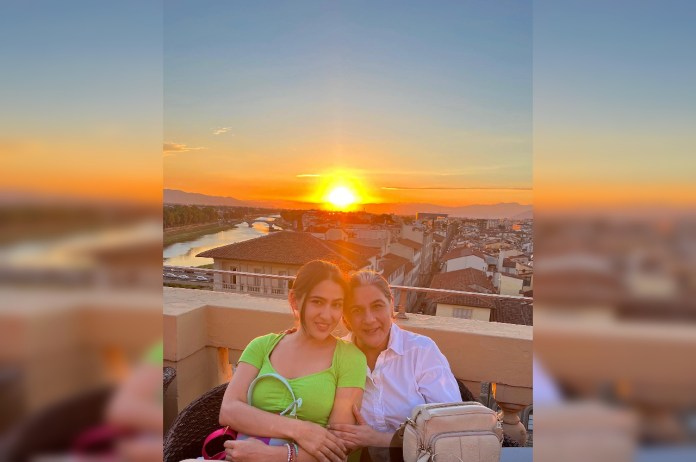 New Delhi: Bollywood actress Sara Ali Khan recently spent some quality time with her mother, Amrita Singh in Italy. Taking to Instagram, she shared a series of photos from their vacation in Florence, but the mother-daughter duo is not alone, they are accompanied by Sara’s friend, Tanya Ghavri.

In the first photo, Sara and her mother Amrita are seen posing for the camera on the roof of a building and a beautiful sunset in the background. Sara donned a green cropped top, pink shorts and shoes while Amrita opted for a white outfit.

In the second and third photos, Sara is seen posing solo at the bridge. Along with her cute outfit, she added a cap, and dark glasses and also carried a bag. In the fourth photo, Sara is seen taking a selfie with her friend Tanya. She also tagged the location as Firenze E Toscana.

Sharing the photos, Sara captioned it, “And the voices in the waves are always whispering to Florence, in their ceaseless murmuring, of love – of love, eternal and illimitable, not bounded by the confines of this world, or by the end of time, but ranging still, beyond the sea, beyond the sky, to the invisible country far away! -Charles Dickens.” Along with hashtags–golden hour, sunset, travel diaries, explore and live anywhere.

Fans also showered her with love. A person wrote, “I can not explain how much I feel so proud of you my beautiful international superstar cinderella, you always making India proud and always writing history.” Another person commented, “Gorgeous.”

Earlier, the actress travelled to London and shared photos with her brothers Ibrahim and Jehangir Ali Khan as well as her dad Saif Ali Khan. In the caption, she said, “Keeping up with the Pataudi’s…”

In another series of photos, she is seen with brother Ibrahim and some friends. In the caption, she wrote, “Summer vibe. With my tribe. Kindly like, share and subscribe.”

Meanwhile, on the work front, she was last seen in the film ‘Atrangi Re’ opposite Akshay Kumar and Dhanush. Now, She will be seen sharing screen space with Vikrant Massey and Chitrangada Singh in ‘Gaslight’.
The film is being directed by Pawan Kripl who earlier helmed ‘Bhoot Police’. She has also recently finished shooting for an untitled project alongside Vicky Kaushal.

Weather Update: It is raining heavily in many states of the country due to...
India

Aasif Suhaf, Srinagar: Two terrorists attempting to carry out a suicide attack on an...

Weather Update: It is raining heavily in many states of the country due to...
India