Salman Khan waves at fans from his balcony, says ”Thank you all…” 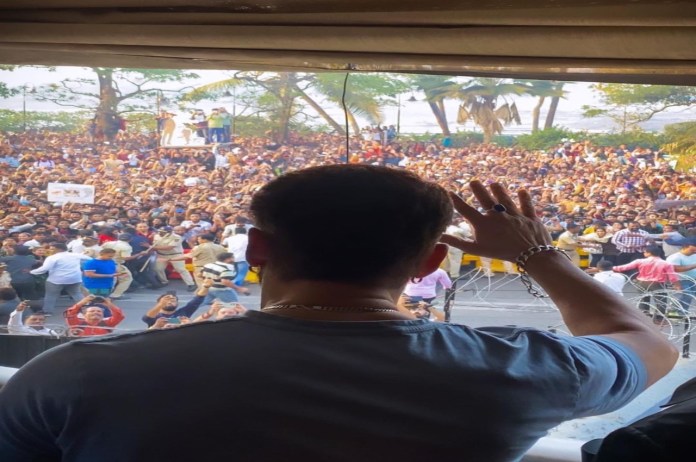 Salman Khan’s birthday: Bollywood’s Dabangg Khan celebrated his 57th birthday with great pomp. On this special occasion, celebs to fans everyone send him warm wishes on social media. At the same time, like every year, this year also Salman Khan has thanked the fans differently. Bhaijaan thanked the fans present outside the balcony of his house. On this special day, there was a gathering of thousands of fans outside the house. Everyone came to catch a glimpse of Salman and wish him a happy birthday from the front. Now Bhai Jaan has thanked these fans on social media.

On Tuesday, he shared a photo on his official Instagram account, in which he can be seen waving to his fans by standing on the balcony. While sharing the photo, he wrote in the caption, ”Thank you all…”

Apart from this, Salman Khan’s ex-girlfriend Sangeeta Bijlani had also reached this birthday party. At this bash, Sangeeta attracted everyone’s eyes towards her with her look. In the video that is getting viral on social media, Salman is seen kissing the forehead of Sangeeta Bijlani.

Many stars reached the party

Many Bollywood stars had reached Salman’s birthday party last night. King Khan Shah Rukh Khan also attended the bash. He wished the actor on his birthday. The videos of both are becoming increasingly viral on social media. In this video, it is seen how special the bonding of both is. Fans are showering lots of love on this video.