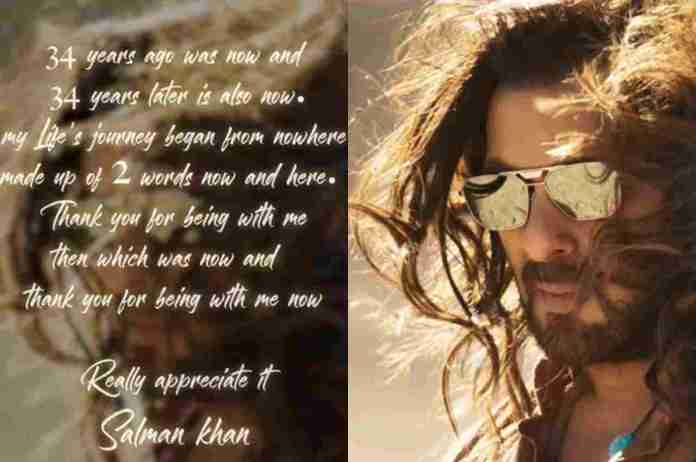 New Delhi: The Indian Film Industry saw the birth of a superstar on August 26, 1988, when Salman Khan made his first ever on screen appearance in Biwi Ho Toh Aisi. While it was a brief role for Salman, he burst into scene and into millions of hearts with Maine Pyaar Kiya, a year later in 1989. 34 years, many memorable roles and blockbusters later, Salman Khan is considered to be one of the biggest superstars of Indian cinema of all time having delivered some of the biggest and most iconic blockbusters through the journey.

The fans of Salman celebrated this day by trending #34YearsOfSalmanKhanEra on Friday and the superstar acknowledged this gesture by putting out a special post on all his social media platforms. He thanked them all for the love and support and followed it up with the announcement of his new film, Kisi Ka Bhai.. Kisi Ki Jaan in a personalised unique way that is signature to him, as the Superstar believes in sharing his news directly with his fans.

“34 years ago was now and 34 years later is also now . .my Life’s journey began from nowhere made up of 2 words now and here . Thank u for being with me then which was now and thank you for being with me now
Really appreciate it,” read a post by Salman, with a new video attached about his upcoming film. Salman has disclosed the film title towards the end of the video in his own unique style, stating “’Kisi Ka Bhai.. Kisi Ki Jaan ” and we trust only Salman to announce films and give updates to his fans in such an interesting way.

The video uploaded by the superstar begins with a text filled with gratitude. He is thankful to his fans for the constant love and support he gets from them. Once the text fades away, and the actor unveils a very new and unique look of himself and finally, the announcement of the title. We can see Salman flaunting his new shoulder cut long hair. With his glasses on, the star looks extremely appealing and attractive to the eyes of the viewers. As his look fades out, the title of Salman Khan’s upcoming film is revealed, ‘Kisi Ka Bhai.. Kisi Ki Jaan’

Salman Khan films have turned out to be a festival in itself with celebrations across the country. He is termed the Sultan of Box Office and King of Single Screens, credited to single handedly revive the culture of mass cinema in the last decade.

He returns to the big screen in a full fledged role with ‘Kisi Ka Bhai.. Kisi Ki Jaan’ after 3 long years, and one hears the film is loaded with all elements that one expects of a Salman Khan film – Action, Comedy, Drama, Romance and Music. The fans have been keenly waiting for an official update on the film and with this new still and a quirky announcement, they seem to have finally got one.