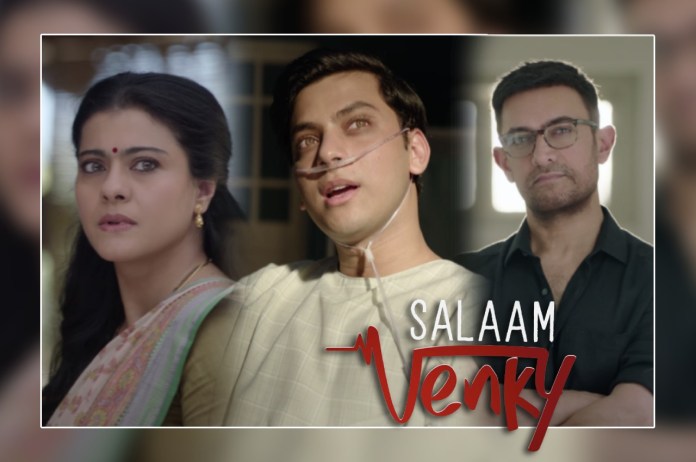 New Delhi: Salaam Venky’s trailer, starring Kajol, was released on Monday (November 14). Vishal Jethwa, Rahul Bose, Rajeev Khandelwal, Ahana Kumra, and Prakash Raj are also featured in the movie. But it was Aamir Khan’s appearance near the end of the trailer that surprised everyone.

Sujata, portrayed by Kajol, and Venky, portrayed by Vishal Jethwa, engage in playful conversation towards the beginning of the trailer. Sujata is taking care of Venky, who is wheelchair-bound and terminally ill. However, as Sujata makes the beautiful allusion to Anand and vows to make his life badi (larger) rather than lambi (longer), he makes a request—his last desire. Sujata won’t give him that, regardless of what it is.

The montage then shows a few touching mother-son interactions, and Sujata grants Venky’s desire. A brief scene after the title card appears shows Sujata, played by Kajol, peering over her shoulder at someone. Aamir Khan may be seen grinning as the camera pans out.

The film’s official summary reads, “Witness the story of Sujata and her son Venky, as they navigate through the most challenging situations one can ever face with a smile and teach us the true meaning of living BiG. Based on a true story of a life well lived.”

Fans reacted positively to the trailer. One user commented, “This looks so touching and good. Looking forward.” Another comment reads, “Wow, Aamir Khan and Kajol on screen together again. What a surprise!”

Talking about what drew her to the role of Sujata, Kajol told a private media channel, “I think it’s a beautiful journey and it deserves to be shared with everyone. And to have Revathy direct me for this story gives me more strength to play Sujata and showcase her strengths.”

Blive Productions and RTake Studios collaborated on Salaam Venky, which is also directed by Revathy. The Last Hurrah was the old name of the movie. On December 9, 2022, it is scheduled for a theatre release.

Kajol was last seen in film ”Tribhanga” which was released on Netflix in 2021. Now, she will soon make her web series debut with ”The Good Wife’s” Hindi adaption on Disney+ Hotstar.