HomeEntertainmentRiddhima Kapoor remembers father Rishi Kapoor 'with a cheer, not a tear'...

Riddhima Kapoor remembers father Rishi Kapoor ‘with a cheer, not a tear’ on his birth anniversary: ‘We miss you so much’ 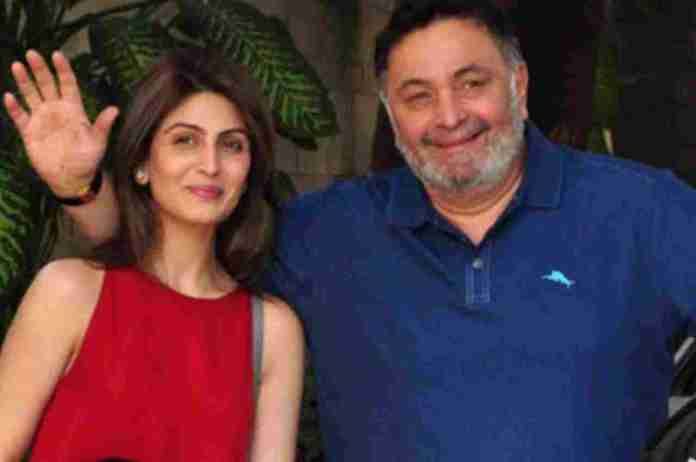 New Delhi: Late actor Rishi Kapoor as well-known for both his good looks and acting. Though he is no longer with us or in this world, his millions of fans still remember and love him. Raj Kapoor, an actor and director, and his wife Krishna Raj Kapoor welcomed their son Rishi on September 4, 1952, in Mumbai. He began his career as a young artist before ascending to great heights. Rishi Kapoor made his debut in his father’s 1970 film Mera Naam Joker. His first role as an adult was opposite Dimple Kapadia in the 1973 film Bobby. Some of his best films are Karz, Yeh Vaada Raha, Saagar, Nagina, Aapke Deewane and Do Dooni Chaar among others.

Riddhima Kapoor Sahni, the firstborn child of Rishi and Neetu Kapoor, recently posted a picture of her late father on Instagram in honour of his birthday. She posted a photo of the actor and captioned it, “We miss you so much, especially today, but (white heart emoticon) with a cheer, not a tear in Our eye) Love you Papa.” Earlier, Neetu posted a special message on social media for her deceased husband with the caption “Happy birthday” and a heart emoji. 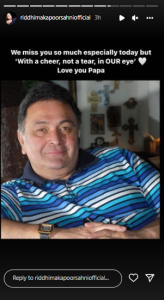 Neetu is currently enjoying the success of her most recent film, JugJugg JeeyoRaj Mehta, who also directed the 2019 smash hit Good Newzz starring Akshay Kumar and Kareena Kapoor Khan, directed the comedy-drama movie, which was produced by Viacom18 Studios, Hiroo Yash Johar, Karan Johar, and Apoorva Mehta under Dharma Productions. Along with Maniesh Paul and Prajakta Koli, the movie also starred Anil Kapoor, Varun Dhawan, and Kiara Advani. After seven years, Neetu made her return to the big screen with this performance. She last appeared in Besharam alongside Rishi and the actor Ranbir Kapoor, who is also their son.