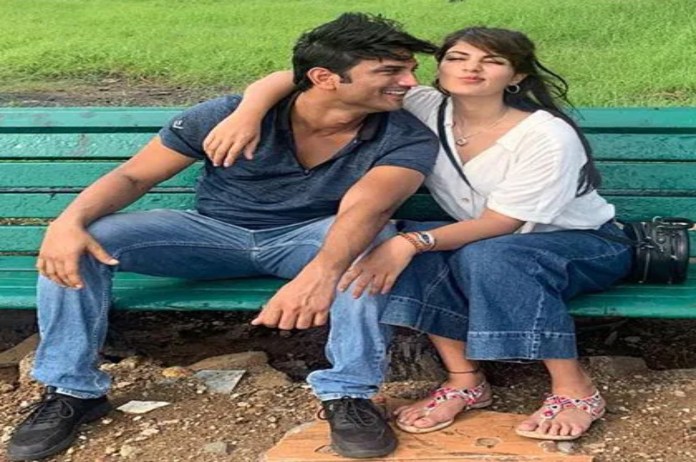 Sushant Singh Rajput murder case: After disturbing new allegations regarding Sushant Singh Rajput’s death made headlines, Rhea Chakraborty posted a mysterious message about surviving. Earlier this week, a Cooper Hospital staffer who purportedly assisted with the late actor’s autopsy stated that the marks on Sushant’s body suggested to him that the actor had not committed suicide but had instead been killed.

During the investigation after his death, Rhea Chakraborty, who has been charged with helping suicide, posted a puzzling statement on her Instagram Stories. The post read, “You have walked through fire, survived floods and triumphed over demons, remember this the next time you doubt your own power.” Along with this, she also wrote, ‘good morning’ wish for her followers. 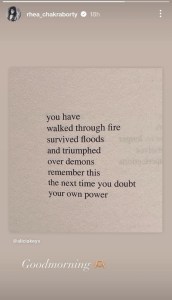 Rhea dated Sushant briefly before his terrible demise in June 2020. Rhea was charged by Sushant’s family with aiding in his suicide and money laundering. She was also accused of purchasing illegal drugs for SSR. The Mumbai Police investigated his death before turning it over to the Enforcement Directorate (ED), Narcotics Control Bureau (NCB), and Central Bureau of Investigation (CBI).

Roopkumar Shah, a worker at Cooper Hospital, revealed a fresh development in his death case. Speaking with TV9 via Timesnownews.com, said, “When we went to perform a post mortem, we learnt he was Sushant and there were several marks on his body and two to three marks on his neck as well. The postmortem needed to be recorded but higher authorities were asked to only click pics of the body. Hence, we did that as per their order.”

In response to recent events, Sushant’s sister Shweta Singh Kirti urged the central bureau of investigation (CBI) to “diligently” check into the murder accusation. She posted a screenshot of the news on Instagram with the caption, “Sushant Singh Rajput was murdered: Autopsy staff makes shocking claim.” While sharing the screengrab, Shweta wrote: “If there is an ounce of truth to this evidence, we urge CBI to really look into it diligently. We have always believed that you guys will do a fair investigation and let us know the truth. Our heart aches to find no closure as yet. #justiceforsushantsinghrajput.”