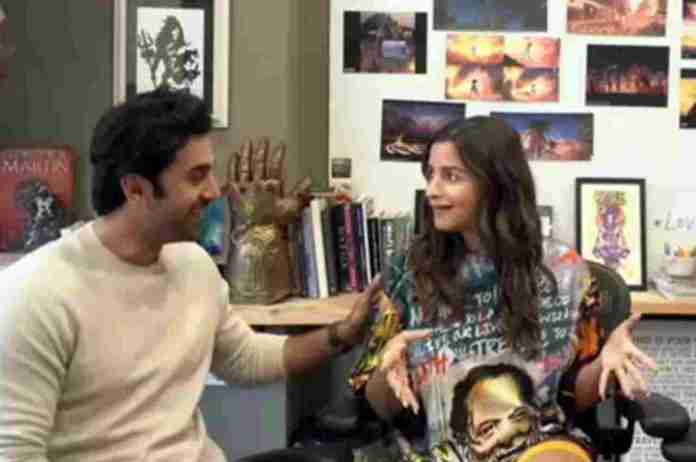 New Delhi: Actor Ranbir Kapoor’s comment on his pregnant wife Alia Bhatt’s weight gain has created quite a stir on social media. He made the comment during a live session which was held to promote his upcoming film Brahmastra with Alia Bhatt and Ayan Mukerji.

During a live session on film promotion, team Brahmastra opened up about why they are not heavily promoting the film. Alia Bhatt replied, “We will promote the film, and we will be everywhere but if the question you are asking is why we are not phailod (talking about widespread promotion) everywhere, right now our focus is…”Ranbir Kapoor quickly pointed at his wife’s baby bump and said, “well I can say somebody has phailod (reference to her gaining weight), adding he meant the comment as a joke. “In a cute way,” he implied. Alia was taken aback by the joke but let it flew in the air.

However, netizens are having a hard time making peace with Ranbir’s tasteless comment. “If he is saying this on camera, think what he says in private… but he has made loads of such comments with Katrina and Anushka.. and they both give it back to him then and there,” said a user.

“That was a disgusting joke to say to a pregnant woman,” another wrote. Another slammed the actor saying, “I can’t believe he said that! Ranbir is a 40-year-old man child with no common sense. Alia deserves better.” “Wtf was this? who talks like this about his own wife who is pregnant? I still remember his and Katrina’s interview during Jagga Jasoos, he was so disrespectful to her. and this was not funny, we didn’t laugh,” said another.

Talking about Brahmastra, apart from Ranbir and Alia, the film also stars Amitabh Bachchan, Nagarjuna Akkineni and Mouni Roy in pivotal roles. The film will hit theatres on September 9.