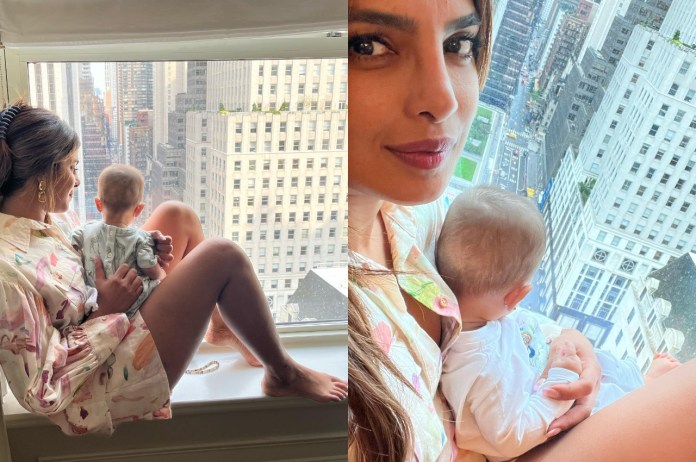 New Delhi: Priyanka Chopra, who arrived in New York on Monday, posted some adorably adorable photos of her and daughter Malti Marie taken during her trip. Malti Marie may be seen snuggled up in Priyanka Chopra’s lap in a picture the actress uploaded on Tuesday. The actress can be seen looking directly at the camera in another image. “Our first vacation to the Big Apple,” said the post’s caption, written by Priyanka Chopra. She embellished the post with an evil eye and a heart-eyed emoji. Emoticons with hearts quickly swamped Priyanka Chopra’s tweet.

On Tuesday, Priyanka shared a few photos of herself and Malti together on Instagram, showing them taking in the scenery of New York City from a window seat. The first image showed Priyanka smiling naturally as she looked at her daughter who was sitting on her lap. In the second image, Priyanka smiled at the camera while still clutching Malti’s hand. The young child was gazing out the window at the New York City streets. Priyanka captioned the pictures, “Our first trip to the big (apple emoji),” adding an evil-eye amulet emojis. Check out below:

Priyanka Chopra and Nick Jonas welcomed Malti via surrogacy in January this year. They have not yet revealed the face of their child to the public, but Priyanka often takes to Instagram to share a sneak peek into Malti Marie’s little adventures.

Meanwhile, on the work front, Priyanka has a lot to offer to her fans. The actor will next be seen in Ending Things. She has also has Russo Brothers’ Citadel with Richard Madden in her pipeline. The actor will make her Bollywood comeback with Farhan Akhtar’s Jee Le Zaraa, also starring Alia Bhatt and Katrina Kaif.