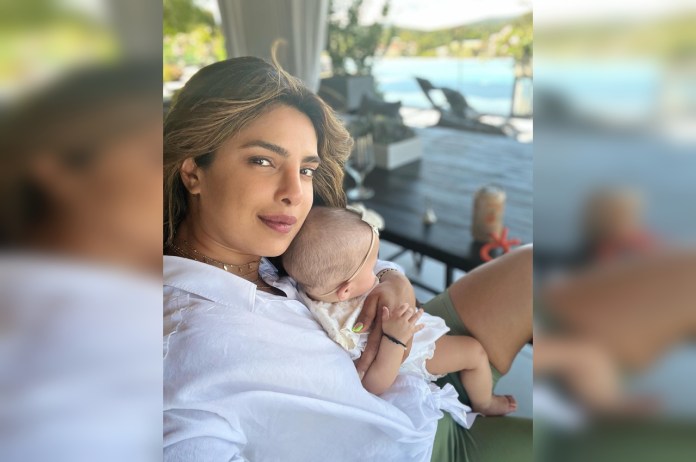 New Delhi: Global star Priyanka Chopra often shares glimpses of her daughter Malti Marie Chopra Jonas on social media. She recently shared one more glimpse of Malti which they both can see playing with each other. Taking to Instagram, Priyanka posted photos as they both spent their weekend at their Los Angeles home near the swimming pool. However, she did not reveal Malti’s face.

In the first photo, ‘The Sky is Pink’ actor clicked a selfie holding Malti close to her and smiling at the camera. Malti kept her hand on the actor’s hand and looked away from the camera. In the photo, Malti donned a white frock and a hairband on her head.

In the second photo, she smiled at her daughter and put her feet on Priyanka’s face. Marie was also seen wearing a black thread around her ankle. Priyanka captioned the post, “Love like no other (red heart emoji)” and tagged her location as Los Angeles, California.

Earlier, Priyanka’s cousin Parineeti Chopra had called Malti the world’s “most beautiful baby”. Talking about Malti, she had said in an Instagram video, “She is the most beautiful baby in the world. They (Priyanka and Nick) had shared her journey. She had a bit of a rough start, but she is healthy now. She’s a beautiful baby.”

Priyanka has many upcoming projects like the web series ‘Citadel’ and films ‘Ending Things,’ ‘It’s All Coming Back To Me’ and the Bollywood film Jee Le Zaraa’ with Katrina Kaif and Alia Bhatt.