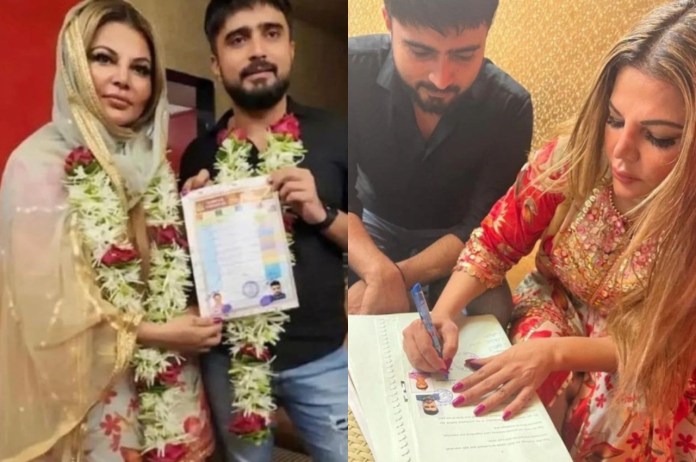 Rakhi Sawant Wedding: Bollywood actress Rakhi Sawant has already won the hearts of people with her best item songs and now the actress is seen grabbing the limelight with her fun and outings in reality shows. Rakhi is also in the headlines for her personal life. The ‘Drama Queen’ has been in a relationship with Adil Khan for a long time. Now some pictures of the couple are becoming increasingly viral on social media, seeing as it is believed that Rakhi has secretly married Adil.

Seeing the pictures of Rakhi Sawant and Adil Khan which have gone viral, it is known that Rakhi has given a name to her relationship. The actress and Adil have done court marriage away from the limelight. Varmala is also visible around the neck of both of them in the photo. In the picture, the couple is seen smiling and flaunting their marriage certificate in front of the camera.

Also read:- Rocketry: The Nambi Effect made it to the list of Oscars 2023

In the viral photo, the actress is looking very beautiful wearing a pink and white printed saraara. At the same time, she has covered a beige-coloured chunni on her head. On the other hand, Adil Khan Durrani is seen in a black shirt and blue denim. Fans are stunned to see these viral pictures of both of them. Along with this, the process of congratulating the couple is also increasing rapidly.

Talking about Rakhi Sawant’s personal life, she is married to Adil Khan Durrani. Earlier, she was married to Ritesh Raj. Rakhi did not even share the pictures of her wedding with Ritesh, after which she surprised everyone by entering ‘Bigg Boss 15’ with Ritesh. Both of them got a lot of limelight in the show.

However, as soon as they came out, there was a rift between the two and the actress decided to separate from Ritesh. After this, Rakhi and Adil are ready to spend their next life together after a court marriage.