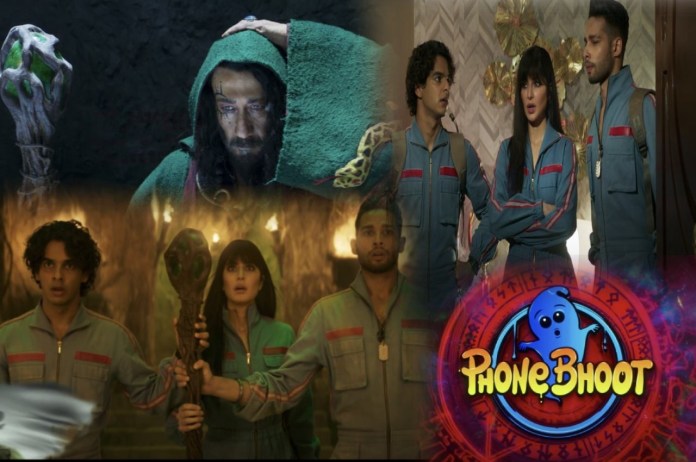 New Delhi: The trailer of Phone Booth, starring Katrina Kaif, Ishaan Khatter and Siddhant Chaturvedi, was released today. The actors have been keeping fans guessing about the seemingly whacky horror-comedy with new posters and teasers.

The video shows Katrina Kaif as a ghost with a mission for Ishaan Khatter and Siddhant Chaturvedi, who appear to be the desi version of Ghostbusters, and she wants them to take down an eerie Jackie Shroff, or ‘Aatma Ram,’ as he’s known. The film has everything you’d expect from a Bollywood horror comedy: slapstick humour, item songs, a female ghost with her feet facing the opposite side, and some questionable moments of seriousness tossed in. There’s also a barb at lousy Hindi, delivered humorously by Katrina herself. When a ghost, played by Sheeba Chaddha, is unable to say’moksh,’ Katrina deadpans, “Tumhari Hindi weak hai?” The trailer includes references from classic Bollywood films including Koi Mil Gaya and Gully Boy.

Katrina had previously announced the trailer release date with a video in which Ishaan and Siddhant were seen investigating something with glowing hands. The trailer for the film depicted a huge Katrina playing with the automobile, which featured Ishaan and Siddhant in the front seats. She appeared to raise the miniature vehicle and drop it in mid-air, only to catch it again a split second later.

Katrina was most recently seen in the 2021 film Sooryavanshi, co-starring Akshay Kumar. Aside from Phone Bhoot, Katrina’s next films include the third chapter of the Tiger series with Salman Khan, Merry Christmas with Vijay Sethupathi, and Farhan Akhtar’s Jee Le Zaraa starring Alia Bhatt and Priyanka Chopra.