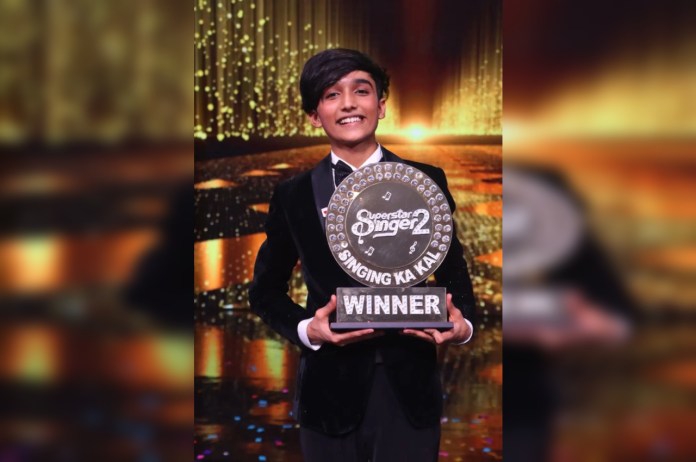 New Delhi: The second season of the singing reality show Superstar Singer has reached its end. In the finale of the show last night, Mohammad Faiz of Arunita Kanjilal’s team lifted the trophy as the winner. The 14-year-old Mohammad Faiz, a resident of Jodhpur, was up against Mani from Dharamkot, Pranjal Biswas from West Bengal, Sayesha Gupta of Mohali, Aryan and R Babu and Rituraj from Kerala.

He gave a tough competition to all the finalists and was crowned as Singing Ka Kal in Sony Entertainment Television’s Superstar Singer 2. The show was judged by Himesh Reshammiya, Alka Yagnik and Javed Ali.

Who is the winner of Superstar Singer 2?

Superstar Singer 2’s ‘The Grand Finale’ was a musical event that helped the audience uncover young singing talent from across the country. Even after the announcement of the top 6 finalists, the audience was waiting for the winner and in the end, Mohammad Faiz was the one who lifted the Superstar Singer 2 trophy.

The 14-year-old Mohammad Faiz not only won the trophy but also gave a cheque of INR 15 lakhs from Sony Entertainment Television. Not only this, each one of the top 6 finalists has received a one-year subscription from BYJU’s classes along with a one-year supply of cheese from Go Cheese respectively.

What did Mohammad Faiz say after winning the title?

After winning the show, Mohammad Faiz told the media portal, “Being on Superstar Singer 2 is an achievement by itself. When I gave the auditions, never in my wildest dreams did I ever imagine that I will not only be in the TOP 6 but also win the coveted trophy. I am unable to describe this feeling in words, it’s so surreal. It still feels like a dream to me. I would like to thank all the viewers and my fans i.e., Faizians who have showered me with so much of love and votes. I also want to extend my gratitude to everyone who has made my journey on Superstar Singer 2 truly special, especially all the judges and my captain Arunita di, who has been my pillar of strength, believed in me and guided me to make this dream of mine come true. The show has been an enriching experience throughout and has given me friendships that I will treasure forever. I am extremely delighted to have received this opportunity to showcase my talent.”