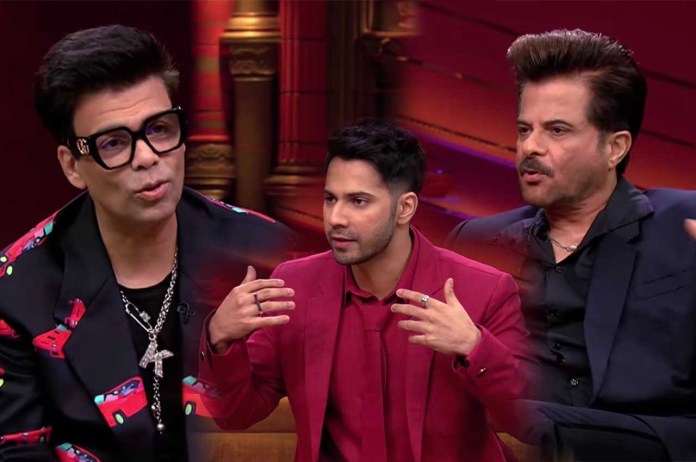 Anil Kapoor is asked to list three things in the trailer’s opening scene by host and filmmaker Karan Johar that make him feel young. The actor responds, “Sex, sex, sex,” to the host and Varun Dhawan’s laughter. Anil is abruptly brought back into the scene and says, “This is all scripted,” in a deft way. Anil’s reply leaves Varun in splits. Next, Anil is heard saying, “This is all scripted.” Varun is then asked out of Katrina Kaif and Deepika Padukone, with who he wants to work. The  October actor said: “I always get told that I look like a kid.” When Karan asked him, “You think they look older than you?” Varun said, “I am told I look younger…” Karan replies, “That means they look older than you.” Varun ends by saying, “You are saying (that).”

KJo captioned the promo: “It doesn’t get younger & cooler than this on the Koffee couch – this duo will create a riot in this episode!!! #HotstarSpecials #KoffeeWithKaranS7, Episode 11 streaming this Thursday 12:00am only on Disney+ Hotstar.” Watch the promo below:

Arjun Kapoor, a close friend of Varun’s and the nephew of Anil Kapoor, is also given the roast treatment. Varun is quizzed by Karan on topics like “flirting with strangers,” “who is obsessed with gossiping,” and “who is most likely to choose the wrong script.” “Mera nephew hai yaar,” an alarmed Anil exclaims to Varun.” In the end, Anil and Varun engage in a dance competition that leaves Anil exhausted and prompts him to remark, “Dance karke thak gaya yaar.” Ten episodes of Koffee With Karan 7 have already been broadcast.