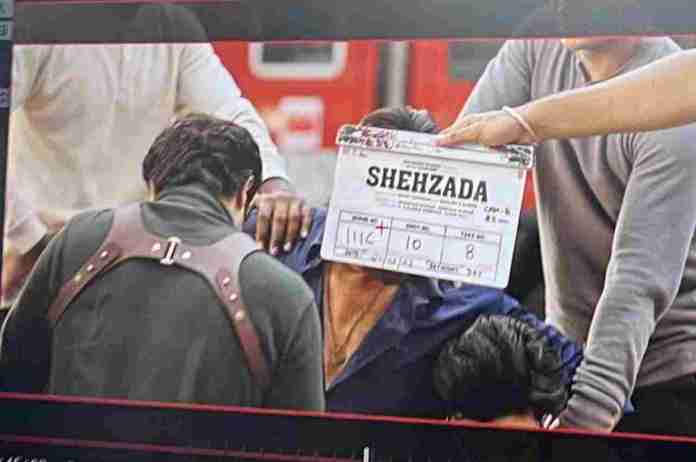 New Delhi: Kartik Aaryan is still flying high on the success of his last release film, Bhool Bhulaiyaa 2, which was one of the year’s biggest hits. However, he is not at all laid back. The actor, who has a number of exciting projects in the works, has now shared a sneak peek of his upcoming film Shehzada. The actor shared a photo of himself behind a clapboard, revealing the photo was taken after the climax shot of Shehzada.

Kartik Aaryan said, “Insomniac like me slept for ten hours after the epic climax that we shot for Shehzada filled with Action which I have done for the first time.” Speaking about the project, Kartik Aaryan further added, “One of the most difficult, hectic and again a new zone for me. Just can’t wait for you guys to see it #10thFeb2023. Meri sabse commercial picture aa rahi hai.” Replying to the post, actor Ronit Roy said, “I can’t wait to see this picture too. This picture is as special to me as you are to me.” To this, Kartik Aaryan said, “Same,” with a heart emoji.

Earlier, Kartik Aaryan had re-shared two pictures and a caption originally posted by veteran actor Anupam Kher. In the caption, he said, “Superstars: Since the criteria of calling an actor (however good he/she is) a Superstar depends on the money their movies make, I am sharing with you all a pic of two SUPERSTARS. At least this year for me. My film Kashmir Files made ₹ 350 crores worldwide and Kartik Aaryan’s Bhool Bhulaiyaa 2 earned close to ₹ 250 crores. Time is changing and so is the audience’s taste and the system. Who had ever imagined that a day will come, when my film like Kashmir Files in the lead will do business of 350cr. It is good churning. I welcome the change. Hope you all do too.  It was such a pleasure to meet Kartik recently. He is going to be here for a long, long time. Both, as an actor and a superstar…”

Other than Shehzada, Kartik Aaryan also has Captain India and Satyaprem Ki Katha.