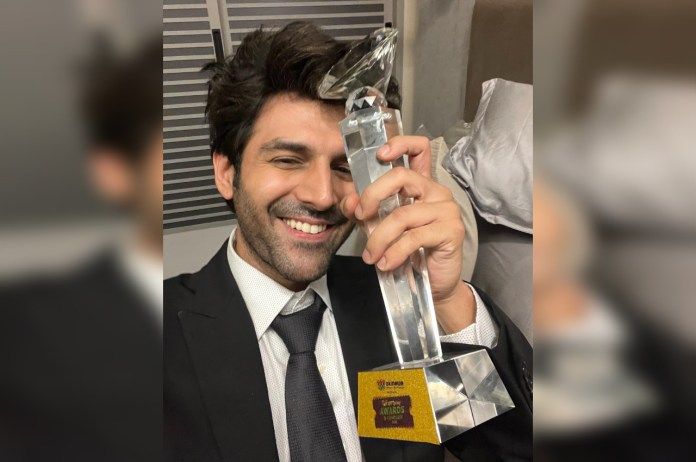 New Delhi: The man of the nation, Kartik Aaryan has been riding high on the mega success of his latest film, Bhool Bhulaiyaa 2 but his accolades and applauds for his previous superhit, Dhamaka has still not stopped pouring, where he left all impressed in a new avatar as Arjun Pathak.

At an award function held last night, the versatile superstar bagged the award for ‘Best Actor’ award for Dhamaka and shared an adorable, happy selfie on his social media where he looked extra stylish and dapper in a black suit over a white shirt and black tie. He captioned it saying, “Best Actor #Dhamaka !!” as he thanked the award team for recognising Arjun Pathak and added, “Honored and Grateful.”

With Dhamaka, Kartik truly proves his ability to slip into any character with ease. The intense and serious role was a new on-screen form for the actor and he played it to the T, winning rave reviews from critics, audience and journalists for his portrayal of the news anchor, Arjun Pathak. And after his dhamakedaar OTT debut, he went on to revive the box office as well, with Bhool Bhulaiyaa 2.

Currently, Kartik has an exciting lineup ahead with big-ticket projects like Shehzada, Freddy, Captain India, Satyaprem Ki Katha, Kabir Khan’s untitled next and his most recently announced, Aashiqui 3.