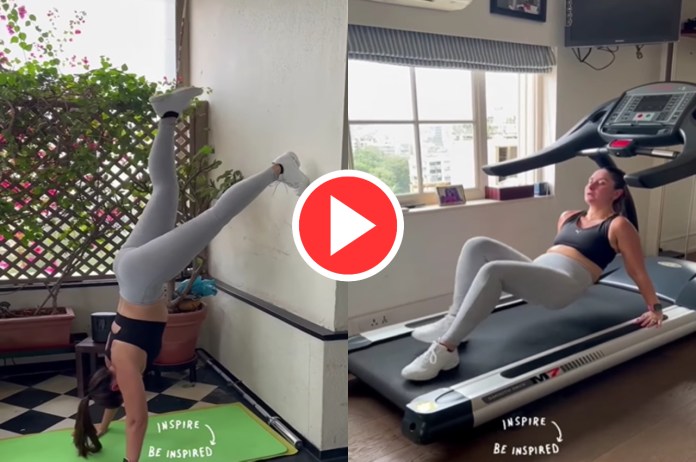 New Delhi: Bollywood superstar Kareena Kapoor Khan is setting some major fitness goals for her fans. The actress recently shared a workout video of hers on her Instagram story, in which she was seen sweating profusely. Kareena’s video becomes a true motivation for the fans.

In the video, Bebo is seen wearing a black sports bra teamed with grey joggers and white shoes. During this, she is sometimes running on the treadmill, and sometimes she is seen doing other exercises. Sharing this video on her Instagram story, Kapoor also tagged her sister-in-law Soha Ali Khan and thanked her for giving her inspiration.

Kareena also put a sticker on the video, which reads, ‘Inspire, be inspire’. Also praised Diljit Dosanjh’s songs running in the background of the video and called him the best. She is seen working out while listening to Diljit’s song ‘Born to Shine’.

Kareena has worked together in films like Diljit ‘Udta Punjab’ and ‘Good Newwz’. Both the films were hits at the box office. Khan just returned from her trip to London last month, where she spent quality time with lots of pasta and wine. Foodie Kareena had gained a lot of weight due to this, due to which people also misunderstood her being pregnant.

Meanwhile, on the work front, Kareena recently started working on Hansal Mehta’s next. She shared a photo of the script on her Instagram, which has the title of the film written on it. Reportedly, it is a moody thriller and the shooting of which will start in September. She is excited about the film as she will be playing the role of a detective. Apart from this, she is also set to make her OTT debut in Sujoy Ghosh’s film opposite co-actors Vijay Varma and Jaideep Ahlawat.