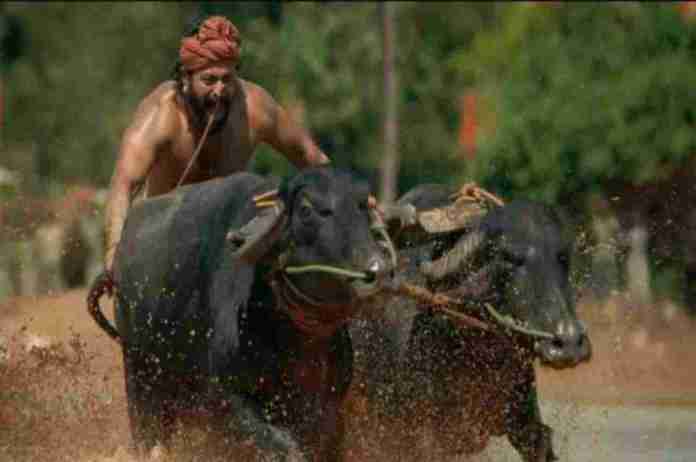 New Delhi: The makers of KGF and Salaar announced the release of the trailer of their next movie titled ‘Kantara’.The trailer of Kantara, starring actor Rishab Shetty, was released on Monday morning ahead of thefilm’s release in cinemas on September 30. Going by the visuals, the movie promises an intense andexciting drama set against the rural backdrop of sandalwood smuggling. The background music of themovie Kantara meticulously brings together a tale of myths, legends and superstition. Rishab Shettythe lead protagonist , sporting a thick moustache and beard, looks menacing and leaves a solid impactin just a few seconds. The trailer takes off with a story of a King who gave a piece of a land to the foresttribes. The great duel and the drama begin when a group of police officers threatens the village fabledwith a belief that legends say can unleash a deadly curse when harmed. The character of Rishabhshetty seems to be fighting a dual battle when he is caught in the crossfire of superstition and thesupernatural and reason and practicality on the other hand.

Shot across uniquely rugged landscapes and the hinterland of Coastal Karnataka, the story spells ofsacred customs and traditions, hidden treasures and generational secrets. It also has an element oflocal sports and folklore involved in it. The trailer deeply epitomizes, how mythical and super naturalelements can come together to create fear in people’s minds. The trailers unique pace keeps theviewer hooked until the mystery surrounding the forest is uncovered. The best feature of the trailer ishow it encapsulates raw fear as each character faces their own demons. We get shots where we seeRishabh flex his acting chops. The visuals also assure us that the film will be high on spectacular action sequences.

Kantara can be another stunner in the making from Hombale Films, the makers of KGF. The trailer forthe movie looks rock solid and intrigues the viewers with its beautiful blend of background score thatkeeps the audience hooked right till the very end. It will be great to see how the audience respondsto the movie. Sadly, the movie is only being released in the Kannada language. The makers areconsidering the option of dubbing the same in other languages as well. For the OTT platforms, thedeal hasn’t been disclosed yet.

Kantara is directed by the lead Rishabh Shetty. Sapthamy Gowda the female lead gets to play a fiestycharacter in the movie with a touch of romance with the male protagonist. The film also stars Kishore,Pramod Shetty and Achyuth Kumar in the lead roles and is produced by Vijay Kiragandur under theHombale Films banner. The music for the movie has been given by B Ajaneesh Loknath andcinematography has been done by Arvind S Kashyap. The movie is slated to release on September 30.The fans are surely in for a delightful treat at Dusshera.

Hombale Films is surely getting the formula right for catching the interest of the viewers. Their anotherMagnum Opus ‘Salaar’ with Prabhas will be releasing in September 2023.