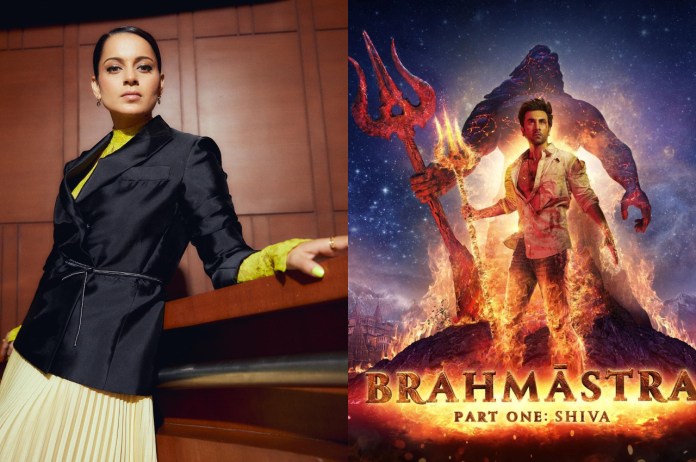 New Delhi: The much-awaited film of the year Brahmastra has been released with excellent box office numbers. While some sections of viewers weren’t impressed, others praised it comparing it to DC, MCU level.

Now Bollywood star Kangana Ranaut took to her social media handle to review Ranbir Kapoor and Alia Bhatt starrer. Looks like Ayan Mukerji’s magnum opus failed to impress the Queen actress. Kangana in a series of Instagram posts bashed Brahmastra and called it to be a ‘disaster’.

In the same post, she said that those who call Ayan Mukerji a genius should be jailed. She further said, Ayan played with religious sentiments as he renamed the movie from Jalaluddin Rumi to Shiva owing to Bahubali’s success.

Kangana further went onto writing, ” if such opportunist, creativity deprived, success-starved greedy people are called geniuses then it’s not manipulation but a well thought off strategy to call din ko raat and raat ko din.”

She even bashed Karan Johar saying he is more interested in knowing people’s sex life rather than focusing on his scripts. The post reads, “People like Karan Johar should be questioned for their conduct…he self admittedly buys reviews…this time he tride to ride Hinduism and south wave…all turned pujaris suddenly…” 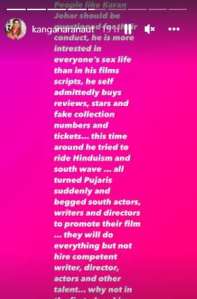 Brahmastra is about a boy named Shiva, who happens to be a DJ, but soon realises his destiny chose him for something more. He is destined to awaken Brahmastra. Hhe rides on a quest to understand his connection with the element of fire along with his love lady Isha. The film stars Ranbir Kapoor and Alia Bhatt in the lead. Apart from them, Brahmastra also has Amitabh Bachchan, Mouni Roy and Nagarjuna in pivotal roles. The film also has a cameo by Shah Rukh Khan.