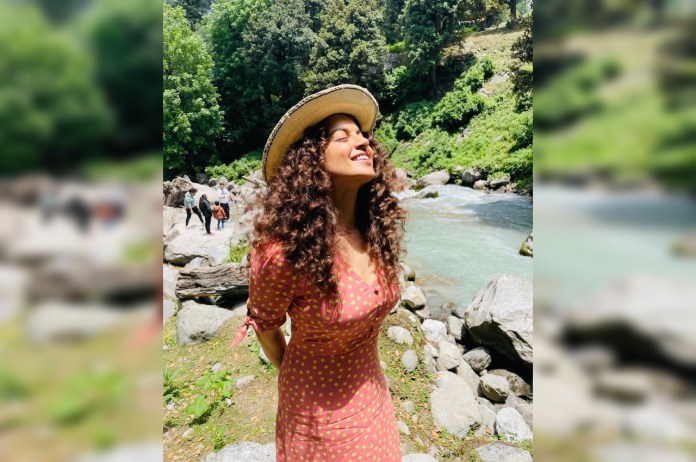 New Delhi: Actress Kangana Ranaut to sue an award show ‘Filmfare’ after they invited her to their event and wanted to award her for the movie ‘Thalaivii.’ She explained her decision by sharing a note on Instagram.

Also Read :- Koffee With Karan: Siddharth and I are more than close friends, says Kiara Advani

Kangana shared her thoughts on Instagram Story. “I’ve banned unethical, corrupt and totally unfair practices like @filmfare since 2014, but since I have been getting many calls from them for attending their award function this year as they want to give me award for Thalaivii… I am shocked to know that they are still nominating me. It is beneath my dignity, work ethics and value system to encourage such corrupt practices in anyway, that is why I have decided to sue @filmfare … thanks,” she wrote. 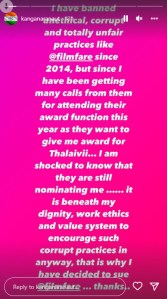 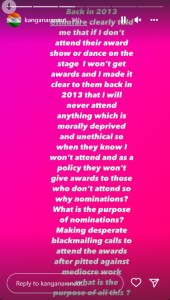 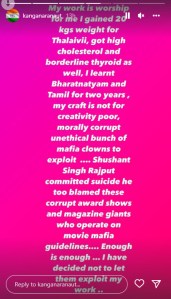 Kangana was nominated for the ‘Best Actress’ in a leading role for the movie Thalaivii along with Kiara Advani, Kriti Sanon, Parineeti Chopra, and Taapsee Pannu and Vidya Balan. For the Best Costume Design category, Neeta Lulla and Deepali Noor got a nomination and Unifi Media gained a Best VFX nod. Ranaut’s co-star Raj Arjun is also nominated for ‘Best Supporting Actor’ category.

According to the latest update, Filmfare awards have refused Kangana’s charges are incorrect. They said in a report that they are also cancelling her nomination in the ‘Best Actress’ category. 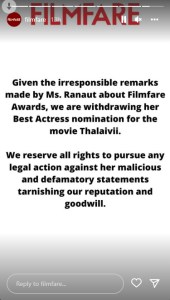 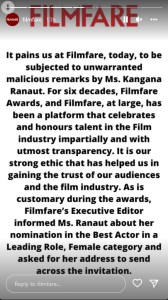 “@filmfare has finally withdrew my best actress nominations, thanks to everyone who supported me in this fight against corrupt system but this doesn’t stop me from taking legal action against them… my endeavour is to put an end to these unethical practices and stop such malicious award shows…see you in court @filmfare,” Kangana wrote on her Instagram Stories. 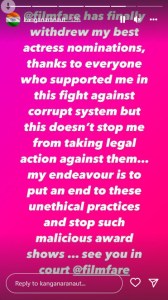 Kangana was last seen in Dhaakad which was a major flop at the box office. Currently, she is gearing up for her directorial Emergency. She will be portraying the role of former PM Indira Gandhi.