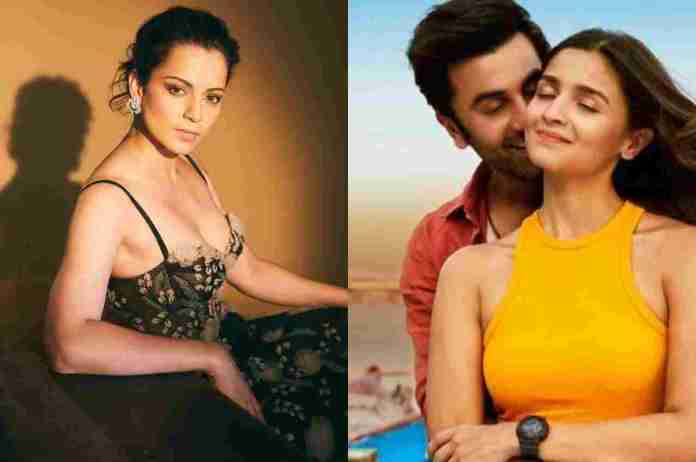 New Delhi: Brahmastra, directed by Ayan Mukerji, was finally released last week to great acclaim after an almost ten-year wait. The fantasy drama, which stars Ranbir Kapoor and Alia Bhatt, received varying reviews from critics and moviegoers, but it is doing very well at the box office.’=

Brahmastra made Rs 160 crore in its first two days of release worldwide, and on Sunday, it saw an increase once more. While everyone in the industry is hoping that Ayan Mukerji’s film will put an end to Bollywood’s current slump, Kangana Ranaut has accused Karan Johar, the head of Dharma Productions, of sharing fake box office figure.

“I want to interview Karan johar and understand why is he declaring gross collection of Brahmastra and not nett collection? What is the desperation? Also after making ₹60 cr (that’s the nett collection they have declared, I don’t believe in this number but nett amount India is 60cr for two days according to them). Even if we believe them, how come ₹650 cr film emerged a hit already,” she wrote.

Kangana then referred to KJo as the “movie mafia” and demanded that he explain the math underlying the Brahmastra box office figures. “Karan Johar Ji, would you kindly enlighten us? I’m afraid the laws of nature apply differently to the movie mafia than they do to merely mortals like us. Therefore, there are different mathematical concepts for privileged people like you and underprivileged people like us. Please enlighten us on this, she pleaded.

In another Instagram story, Kangana shared a Tweet that called Brahmastra a ‘hit’ and alleged that her films Manikarnika and Thalaivii were downplayed. “This Box Office India handle has been harassing me and many like me because he is on payroll of the mafia…Today he declared Brahmastra a big hit in one day, where according to him it has only earned ₹65 cr so far. He did major smear campaign against Manikarnika (cost ₹75 cr…theatrical revenue ₹150 cr). He declared it a flop. Thalaivii ( ₹100 cr prerelease recovery) pandemic release…he declared it a disaster,” she wrote.