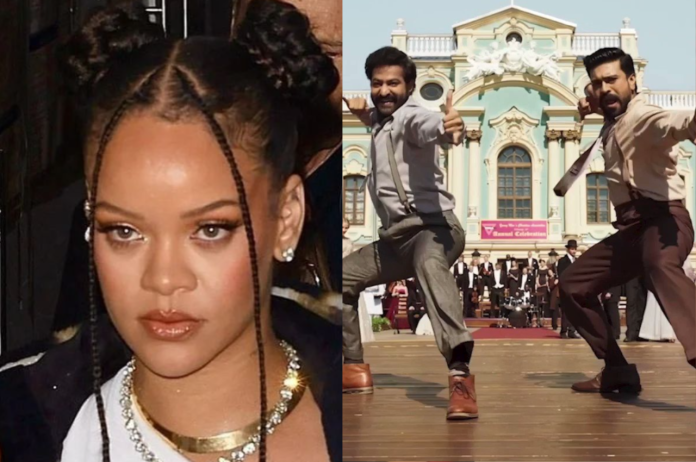 Golden Globe Awards: The Indian movie business is experiencing a historic day. By winning the nation’s first Golden Globe Award at the 80th edition of the famous ceremony, SS Rajamouli’s RRR has made the country proud. The RRR song Naatu Naatu won the award for Best Original Song, whereas Argentina, 1985 from Argentina won the award for Best Non-English Language Film.

Leading actors Jr. NTR, Ram Charan, Rajamouli, and music composer MM Keeravani attended the awards on Tuesday night (Wednesday early in India) in Los Angeles with the rest of the cast and crew behind the magnum opus. One of the images and videos from the ceremony that are currently going viral on social media is singer Rihanna congratulating team RRR.

For those who are unaware, Naatu Naatu and Rihanna’s song Lift Me Up from Black Panther: Wakanda Forever were both nominated for Best Song. She pauses briefly to congratulate the team on their historic victory before continuing while waving. Rihanna selected a black velvet dress and a thick matching stole from the Schiaparelli Haute Couture collection. She completed her ensemble with a diamond necklace and pair of earrings from Cartier.

The fan page, while sharing the video, captioned it: “Rihanna congratulated the ‘RRR’ table on their Best Original Song win for Naatu Naatu.”